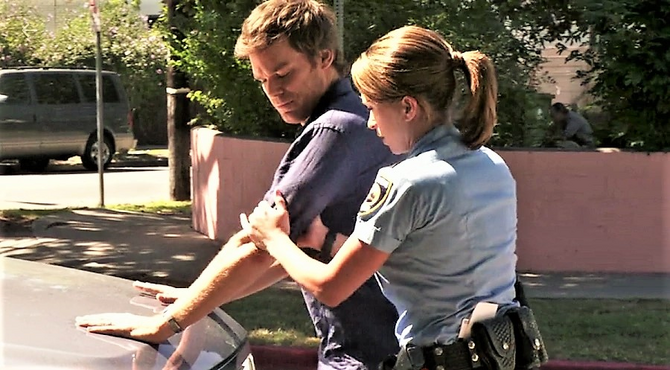 Officer Zoey Kruger is a character in Season Four of the Showtime series DEXTER.

She was a policewoman who shot and killed her husband and daughter. Unlike most known police officers, she worked for the Pembroke Pines Police Department.

During a home invasion, according to Zoey, her husband and daughter were killed, and she was shot in the arm and foot. Zoey wrestled the gun from the intruder and grazed him as he fled.

Sam the blood guy at Pembroke Pines Police Department questions a blood swipe and mentions it at a conference which Dexter Morgan attends.

Dexter pays a visit to Sam in his lab and brings up the questionable blood swipe he had mentioned. Sam brings out Zoey's file and goes over the case with Dexter.

Photos of the crime scene show that Zoey’s husband was shot in the stairway and her daughter was shot in her bedroom. The blood swipe belonged to Darius Rae, a drug dealer Zoey roughed up the day before her family was murdered. The swipe was the only blood of Rae that was found anywhere at the scene.

Sam tells Dexter his suspicions. He thinks that Zoey provoked the confrontation with Rae to get blood and then planted it. This gave her the perfect narrative - Rae broke in for retribution, and her family became collateral damage. Shortly after the crime, Rae was "conveniently" gunned down in a gang-related shooting.

Dexter finds several problems with Zoey's story. First, he observes Zoey at a shooting range and discovers she is an expert marksman. This makes it extremely unlikely she would only graze an attacker. Also, it's unusual that the attacker left no blood other than a smear on a door jam. By examining the photos, Dexter could tell Zoey was wearing gloves during the shooting, which alerts Dexter to her involvement.

Zoey hosts an open house, which Dexter uses as a cover to look around. She flirts with him and commiserates when Dexter expresses frustration with married life. While Zoey talks with a prospective buyer, Dexter deduces that she disposed of her (nitrile) gloves in her garbage disposal. He temporarily breaks it and finds a sliver of a glove still inside the disposal. Back at the lab, he finds blood and gunpowder residue on it, confirming that Zoey used her own gun to kill her family.

Zoey learns that Dexter is investigating her case from Langsbury, and is suspicious that his motive is to bring her to justice. She pulls him over on the road in her patrol car and tries to intimidate him. When that doesn't work, she later threatens to kill him at a gas station. When he thwarts that attempt, she breaks into his home to finish the job.

Zoey plans to stage another "home invasion," but Dexter surprises and subdues her. When she wakes up in her daughter's bedroom, Zoey says the pressure of family life forced her to kill her husband and daughter. Dexter notes the similarity between them but he suddenly realizes that he would rather get caught than lose his family.

Dexter informs her that he booked a trip to the Philippines (a non-extradition country) and he will pack her suitcases to make it look like she fled before the re-opening of the investigation into her family's murder. He collects a blood slide and kills Zoey by stabbing her in the chest. 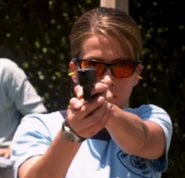 Dexter is given Darius Rey's file

Dexter waits to ambush Zoey with a syringe of M99

Dexter explains his plan for her

Dexter collects a blood slide from Zoey
Add a photo to this gallery
Retrieved from "https://dexter.fandom.com/wiki/Zoey_Kruger?oldid=104932"
Community content is available under CC-BY-SA unless otherwise noted.