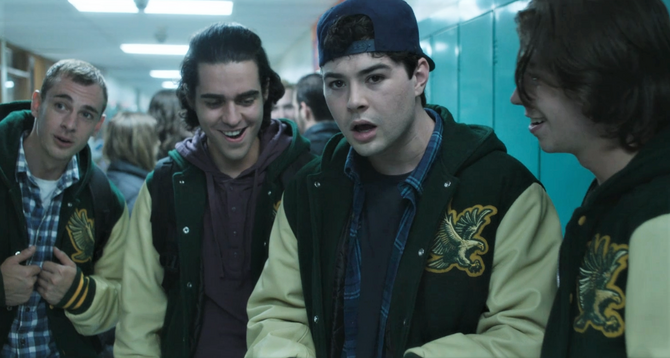 He is the captain of the Iron Lake High School wrestling team. He’s a bit of a bully, but generally the go-to-guy to have a good time. He’s the gateway to the in-crowd, which includes the daughter of the chief of police

Zach is 'a bit of a bully', but he's generally the go-to-guy to have a good time. He is the gateway to the in-crowd, which includes Audrey Bishop, the daughter of the chief of police.

Iron Lake locals show up at Dexter's cabin to join the search for Matt Caldwell. Audrey introduces Harrison to Zach and Scott, jokingly calling Zach the smart one. Zach then leads a small group of teenagers to a vacant cabin at Roaring Forks Summer Camp. When Edward Olsen's helicopter whirrs past overhead, Zach orders them to hide. Harrison reminds them about looking for Matt but Scott says the whole town and the reservation are searching. Zach agrees they aren't needed. Audrey calls Matt an "entitled prick" and says they are going to party. Groaning, Zach tries to break into the cabin but it has a new lock on the door. Next, Scott unsuccessfully tries to break in the door by force. Harrison speaks up to say that he's "got it" and easily removes the lock. Smiling, Audrey tells Harrison, "Mom is really not gonna like you." Zach glances at Harrison suspiciously.

Inside the cabin, the group plays music and smokes pot. Harrison refuses to take Audrey's joint so she passes it to Scott. Zach asks Harrison if he’s “straight edge” and Scott asks if he's “Mormon.” Harrison tells them that he has a history with drugs but got clean a couple of years ago. Audrey and Zach begin to question Harrison. When they ask about his mother, Harrison says, "My mom died when I was really young, and my stepmom died of cancer a couple years ago." When Zach asks how his mother died, Harrison remains silent. Harrison then claims to be freezing and leaves to get wood for the fire. Zach blames Audrey for starting the personal inquiry.

While Harrison is out of the room, Scott calls him a weird dude whom they know nothing about. Zach decides to learn more and searches through Harrison's knapsack for a  "manifesto." Scott joins in, but they only find a book of sketches. As Harrison is returning with the wood, he hears Audrey ordering Zach and Scott to stop and sees them going through his knapsack. Harrison deliberately makes a clunking noise, which causes Scott, Zach, and Audrey to scramble back to their seats and act innocent.

After dark, the group returns to Dexter's cabin and Angela grounds Audrey for hanging out at Roaring Forks Summer Camp. When Scott scoffs and denies it, Angela points out the Roaring Forks T-shirt he's wearing. Angela orders Audrey to get in the car, but she refuses. Audrey instructs Zach to go with her but he hesitates, saying that he doesn't want to get arrested. Audrey scoffs, insisting, "She's not gonna arrest you. She only acts like a crazed, overbearing dictator with me. Come on, Zach." He then leaves with Audrey.

At school, Harrison sees Zach and his friends laughing in a hallway and he tells them that the placement test was "cake." Scott quips, "Check out the big brain on H." Zach shows Harrison a text message chain with Ethan where Zach pretends to be an interested hot girl. Harrison doesn’t know Ethan so Scott points at him and calls him a "ballsack." They watch Ethan"s reaction as Zach sends him a seminude photo of a female. Harrison says, "That’s fucked up." Zach and Scott laugh.

Instead of joining the cool crowd at lunch, Harrison sits down with Ethan and informs him that he’s being catfished by Zach and his online girlfriend isn’t real. Ethan asks, "Who the fuck are you?" and "Why are you telling me this?" Harrison tells Ethan his name and says, "Because guys like Zach shouldn't always be top of the food chain." From a nearby table, Zach watches the two talking.

With Harrison's help, Ethan gets revenge on Zach by sending a photoshopped meme of him having sex with a goat. Zach is infuriated when his friends laugh. Scott taunts, "Ethan strikes back. You gonna let him get away with that?" Ethan, standing next to Harrison, holds up both his middle fingers. Shouting insults, Zach rushes toward Ethan, apparently to hurt him. However, Harrison intervenes by grabbing Zach's neck and warning him to leave Ethan alone. Harrison then throws a shocked Zach against a locker as Ethan watches in admiration. Scott runs up to Harrison, but he backs down.

Audrey asks what's going on and Scott says they’re "just chillin'".  As Harrison leaves with Audrey, he tells Zach and Scott that he made the wrestling team and will see them on the mat. Zach is speechless.

The students on Ethan's kill list gather in the auditorium and Principal Strode invites Sergeant Logan to the podium to address them. "What's up, Coach?" Zach shouts and the other kids hoot. Logan tells them to settle down and says he's proud of how they handled themselves, adding that counseling is being offered.

Zach suggests a shout-out to Harrison for "saving all their asses" and Logan says they are grateful for Harrison being part of their community.

Harrison stands up to talk. "I mean, I don't really know what to say. Um, I'm glad no one got hurt."  "Except Ethan," Scott interjects. Harrison continues: "You-you know, personally, I don't really hold anything against Ethan. I mean, yeah, he, uh, he planned to do something terrible. And he ended up stabbing me, but, uh, you guys picked on him for years. You-you beat him up, made fun of him. You kind of made his life hell, you know? And I guess it's like, yeah,  ...yeah, we're all victims, or whatever. And I know everyone's saying that Ethan was a-a-a psycho or a-a monster or something, but he was definitely also a victim. So... I don't know. I guess we all have two sides to us. Maybe we're a little bit hero and a little bit, I-I don't know, monster. It's all about which side wins out in the end."