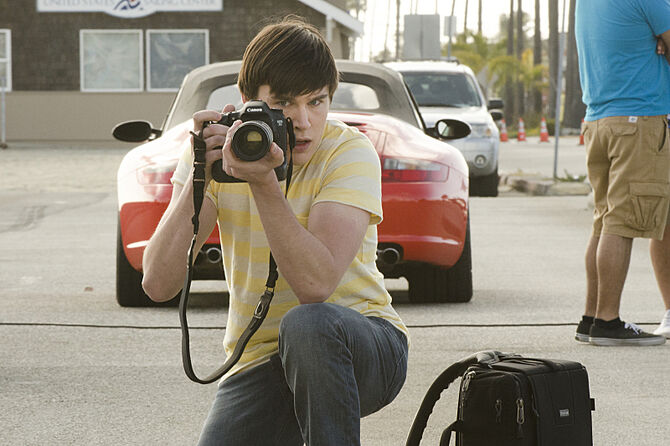 Are We There Yet?

Head sawn into by Oliver Saxon

Bludgeoned his victims to death

His innate craving to kill kept growing stronger until he could not control it. He justified his first kill as protecting his mother from his father's infidelity.
Zach Hamilton is a Character in Season Eight of the Showtime series DEXTER.

He is a young psychopath and budding serial killer. His father is Ed Hamilton, a wealthy friend of the Miami Metro Police Department.

Dexter Morgan decides to teach him the Code of Harry, but Zach ends up a victim of The Brain Surgeon.

Zach has mid-length, combed-forward brown hair and blue eyes. He is fairly pale, and clean-shaven with a fit, athletic frame. He dresses like a rich preppie, in collared, button-down shirts with khaki shorts or slacks. He wears a suit in the Red Coral Club ("Dress Code").

His kill attire is similar to Dexter's. It is a tight, black long-sleeved shirt, dark pants, and black gloves.

Zach is excited by the sight of blood and takes pictures of crime scenes. He then touches up the photos to breathe more life into his "art" with an emphasis on the color red.

When Zach kills someone, he describes the feeling as a heavy weight being lifted off his chest, and finally having control.

Unlike Dexter Morgan, who grew up from early childhood with Harry by his side, Zach didn't have a mentor until his late teens when he had already killed. By then, his psychopathy was deeply embedded, and his urges were potentially stronger than his willpower.

Zach first kill was a woman named Norma Rivera to stop his father's affair with her, which was hurting his mother. Zach, an eerie inquisitive youth, quickly inserts himself into the detectives' questioning of his father about Norma's death. Zach seemed concerned about what his father might say and what the police might know. He later approaches Dexter at his car, asking questions about his analysis of Norma Rivera's murder scene.

Detective Joey Quinn, after speaking to a witness who recognized Zach's Porsche near the scene when Norma Rivera was pummeled to death, is convinced that Zach is guilty and begins to pursue him. To his chagrin, he is told to back off by Deputy Chief Thomas Matthews after the witness recants his story. Quinn, however, continues to tail Zach, hoping to prove his guilt.

As Quinn vets Zach, so does Dexter, eventually finding multiple images of Norma on a hard drive, which Zach took right after bludgeoning her. After learning of Zach's guilt, Dexter decides to prevent him from harming any more innocent citizens. As Dexter stalks Zach, he observes him following his father in an apparent attempt to kill him. Quietly intercepting, Dexter captures Zach and puts him on his table.

However, after hearing Zach's side of the story (that he was killing for his mother's sake), Dexter sees the similarities between Zach and himself. He decides to take Dr. Evelyn Vogel's advice and take Zach under his wing and teach him the Code of Harry, in hopes of teaching Zach to focus his urges constructively.

Catching Quinn stalking him, Zach files a complaint to the police department and demands that Quinn back off, which he is ordered to do by Matthews and Angel Batista. Zach is enthusiastic to go for a kill, but is told by Dexter to have control over his urges for a while, so that things can go more smoothly. Eventually, he grows tired of Dexter holding him back and goes to his apartment, repeatedly knocking loudly on his door. Dexter's neighbor, Cassie, instantly notices this and tells Zach that he is not home, to which Zach gets even angrier and insults Dexter's attitude. Cassie is shown dead later on, and Zach's blood at the crime scene apparently points to him as the killer.

Dexter, knowing that he cannot have the police incriminate Zach since he knows too much about him, covers up the evidence pointing to the young man and searches for Zach himself, with the intention of killing him. Upon finding Zach, Dexter chastises him for allegedly having killed Cassie. However, he soon realizes that someone else tried to frame Zach for Cassie's murder and that Zach was actually stalking a killer named Shawn Decker the whole time. After seeing Shawn's body, Dexter helps Zach cover his tracks and the two resume their relationship as teacher and student. This relationship is short-lived, however.

After Dexter returns home from a romantic encounter with Hannah McKay, he discovers a motionless Zach slumped back in a chair with his eyes open. A song is playing in the background from a phone, "Make Your Own Kind of Music." Dexter approaches the body and spins the chair, revealing that the back of Zach's head has been removed, with his brain cut open and a portion excised (the anterior insular cortex). Zach's body is then wrapped in black plastic, kept intact, and dropped into the Gulf Stream from the Slice of Life.

While Dexter is monitoring Oliver Saxon's recent computer activity, he comes across a video of the latter murdering Zach with a bone saw off-screen, proving that Saxon is none other than the true Brain Surgeon. When he shows it to Vogel, she is horrified and agrees that Dexter should kill Saxon, even though she is now aware he is her son.

Zach watches his father being interviewed by police

Dexter warns Zach not to be seen with him

Returning from the Keys

Zach in The Treatment Room, captured by Saxon

Mark of The Brain Surgeon
Community content is available under CC-BY-SA unless otherwise noted.
Advertisement