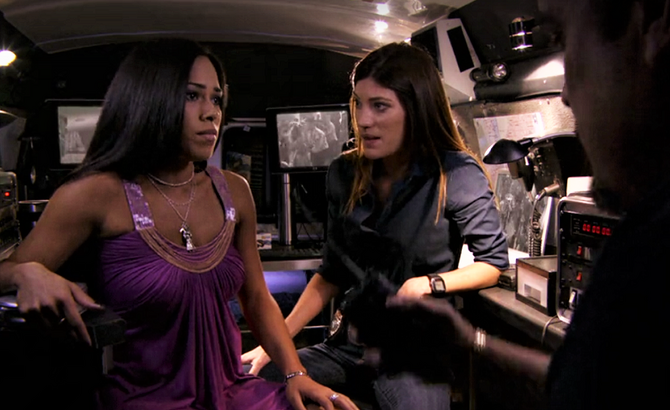 Yasmin Aragon is a character in Season Five of Showtime's series DEXTER.

She was a young, Latina woman who frequented Club Mayan and was associated with both Carlos Fuentes and his brother, Marco Fuentes.

Yasmin was a youthful woman with long black hair and tan skin, typically seen wearing attractive club dresses. The thing that caught Sergeant Angel Batista's eye was the Santa Muerte artifact that she wore as a necklace.

Yasmin had an outgoing personality, and was nonchalant when stood up by a guy at the club. Although she was friends with the Fuentes brothers, she expressed fear of them.

When asked to be an informant for Lieutenant Maria LaGuerta's team, she expressed a great deal of uncertainty for her safety in this sting operation. Unfortunately for her, this was a correct feeling on her part.

During the time of the Santa Muerta killings, Yasmin is partying in the club when her Santa Muerta necklace catches the eye of Angel Batista. He approaches her in a flirtatious manner, and she agrees to leave with him. However, he ends up making a deal to drop her drug charges if she helps take down the Fuentes brothers.

Yasmin talks with the brothers and learns when they are going to Club Mayan. Unknown to Yasmin and the police, the Fuentes brothers take a secret entrance into the club, which make the sting operation more difficult.

Yasmin approaches the brothers, playing "nice" for her own safety and to help the investigation. However, due to bad judgment calls by Maria LaGuerta, Yasmin is shot and killed by an infuriated Marco Fuentes. Another club-goer is also killed, and three wounded.

Debra Morgan is blamed for the incident.

Yasmin's body is viewed in the morgue by her mother.

Angel strikes up a conversation with Yasmin
Add a photo to this gallery
Retrieved from "https://dexter.fandom.com/wiki/Yasmin_Aragon?oldid=111140"
Community content is available under CC-BY-SA unless otherwise noted.