Wormwood is an Object in Showtime's series DEXTER.

It was a device built for a lethal purpose by Travis Marshall as part of the Doomsday Tableaus.

It was a canister that contained poisonous gas that, if released, could kill anyone who inhaled it within roughly ten seconds.The device itself appears to be some sort of bomb, roughly the size and shape of two thermoses attached to one another with a wires connecting the two. Based on the chemicals Dexter found on the boat, methylphosphonyl difluoride and isopropyl alcohol, the device probably mixes both compounds in order to produce the nerve gas sarin. The device is loaded into a backpack (which belongs to the University of Tallahassee, which has a tiger patch ontop of UT) where a switch is made available through one of the straps, from there once the switch is activated it takes roughly 5 seconds for the gas to start leaking into the atmosphere (somewhat like a flea fogger) and thus becomes deadly.

This device was used by Beth Dorsey in an attempt to take out Lieutenant Debra Morgan (as well as any other officers in Miami Metro Homicide), however before any casualties occurred Dexter Morgan (realizing who she was in relation to his previous victim, Steve Dorsey) pushed Beth into one of the Interview Rooms and held the door shut while Deb evacuated the building.

The gas itself attacks the upper respiratory system forcing the body to convulse blood at an accelerated rate. The blood races to escape the body from openings in the face, from what's shown this is the nostrils and the mouth, forcing the victim to cough up extensive amounts of their own blood as they slowly choke on the gas. It is likely (though not shown) that the blood also courses from both the ears and eyes, regardless it is a lethal nerve gas that kills within seconds. (The shown effects of the gas differ vastly from the actual effects of sarin.)

Dexter Morgan suffered side effects from minor exposure to the gas which resulted in nose bleeds and disorientation.

The intended first victim was Lieutenant Debra Morgan, however Dexter Morgan acted fast enough to save Debra and she in turn evacuated the rest of the facility. Beth Dorsey, the carrier of Wormwood, was locked in a room where she received the full intake of gas and was killed within seconds. She is the only one to die in the attack.

Dexter Morgan suffered latent effects from wormwood such as nosebleeds and disorientation, but did not inhale enough of the gas to cause death.

Wormwood inside of a UT backpack. 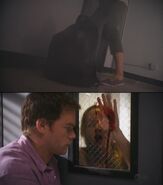