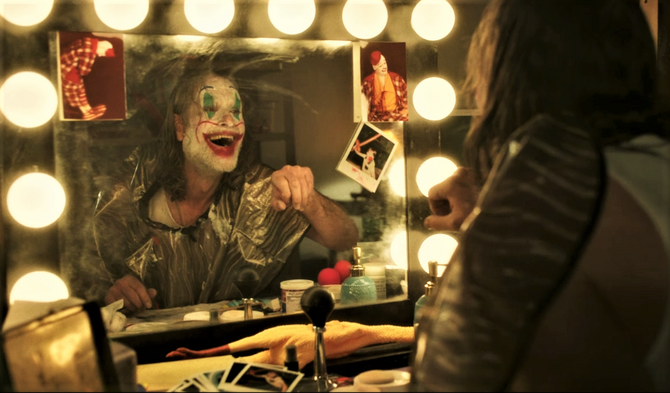 Unknown
Wiggles the Clown is a character in the Showtime special event series Dexter: New Blood.

He killed children and took photos of them dressed as little clowns, only appearing in flashbacks.

In a Miami flashback, a younger Dexter stalks a creepy clown named Mr. Wiggles at a children's playland, finding photos of dead children hidden in his dressing room. As he recounts this story to Harrison, Dexter explains the code and describes their urges as "dark passengers." He tells Harrison about their shared trauma of watching their mothers die, but avoids details.

In flashback, Dexter captures Wiggles by injecting him with a sedative and securing him to a children's slide surrounded by funhouse mirrors. Photographs of his victims dressed as little clowns swirl overhead on a tiny carousel. As Dexter starts to take his trophy, Deb begs him not to tell Harrison about the blood slides. Dexter then stops and tells Harrison that he just scared Wiggles into changing his ways, although he actually stabbed and killed Wiggles.

Later, Dexter and Harrison find Kurt's bunker holding thirty displayed embalmed women, including Molly Park. Shocked, Harrison has a realization and asks, "You killed Wiggles didn’t you?" Deb begs Dexter not to answer but he tells his son that he did kill Wiggles and also killed Arthur Mitchell for what he did to his mother (which is false). Harrison states, "This motherfucker needs to die, too."

Mr. Wiggles was killed sometime before Season One (per Scott Reynolds). While Dexter tells the story to Harrison, he starts to take a blood slide in a flashback. However, "Deb" warns Dexter not to tell Harrison about his "sick-ass ritual" and he stops. It's unclear if he actually did collect a blood slide and just didn't reveal it to Harrison.

Wiggles plays with a targeted boy

Wiggles smiles at a boy

Wiggles waves at a boy

One of Wiggles' photos

Kill room for Wiggles at Playland

Deb cautions Dexter not to tell Harrison he killed Wiggles
Community content is available under CC-BY-SA unless otherwise noted.
Advertisement