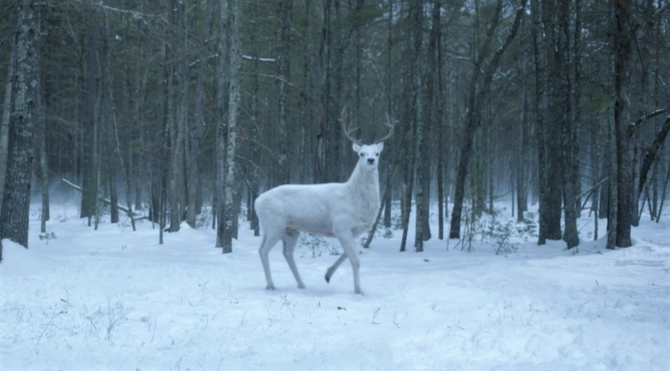 After a long streak of Dexter Morgan suppressing his “addiction,” the buck’s death triggers a relapse.

Dexter, under the name Jim Lindsay, is living in a cabin in the woods. Every morning, he follows a routine that includes chasing a rare white deer, pointing his rifle at it, but never pulling the trigger.

The deer begins to trust Dexter and one day, it lets him approach. As they look into each other’s eyes, Matt Caldwell shoots the deer, spraying Dexter with its blood. Matt runs up, whooping with glee, and bragging that he shot a white buck. Dexter snaps, knocks Matt out with his rifle, and spits on him. He’s tempted to kill him, but thinks: “It's been a long time. But if I'm gonna do this, I need to do it right. First rule of the code... don't get caught.”

That night, Dexter sets up a kill room in his shed to claim his first victim in nearly ten years. During his kill ritual, Dexter mentions the deer, saying, “He didn't do anything wrong. He was perfect. He didn't deserve that.” He also admits to being a serial killer, which terrifies Matt.

Dexter offers his deer sled to bring the white deer back to town so it can be examined. Gig the butcher cuts it open, removes the entrails, and pulls out a slug. He hands it to Angela and Dexter confirms that it’s the same type of bullet that he sold to Matt.

Audrey is upset when she learns that the buck has been kept in Gig's cooler for almost a week. When Gig says it will be disposed of by the Sanitation Department, Audrey doesn't want it treated like road kill, Instead, She and Harrison arrange with Abraham Brown to have the buck burned in an honorary bonfire.

“This ritual for him is therapeutic, stalking this animal, not killing it. This represents a yearning for goodness, for purity, which he wants to cultivate and wants to come closer and closer, and wants to touch figuratively and literally, if he is able to. It’s also a way of pushing yourself into physical exhaustion and maybe exercising the restraint muscle and cultivating restraint. It’s his new sense of power, at least when you meet him. And yes, I think it works on some sort of therapeutic level both in terms of managing his impulses. It’s like heroin methadone, maybe killing, chasing a stranded deer in the woods and not shooting it.” - Michael C. Hall [1]

“That ritual for him is one which therapeutic, monitoring this animal, not killing it. It represents some aspiration to goodness, to purity, one which he desires to domesticate and desires to return nearer and nearer to, and desires to figuratively and actually contact, if he’s in a position. It’s additionally a technique to push himself to bodily exhaustion and to possibly train the muscle of restraint and domesticate his restraint. That’s his new sense of energy, no less than once we meet him. And yeah, I feel it really works on a form of therapeutic degree when it comes to him managing his impulses. It’s like methadone to the heroin of killing possibly, chasing a grounded deer in the woods and never capturing it.” - Michael C. Hall  (TV Critics Affiliation panel, 24 August 2021) [2]

Dexter extends his hand to the deer

Dexter and deer get closer

Reflection of Dexter in deer's eye

Dexter stares into the distance

Dexter slams his rifle into Matt's head, knocking him out