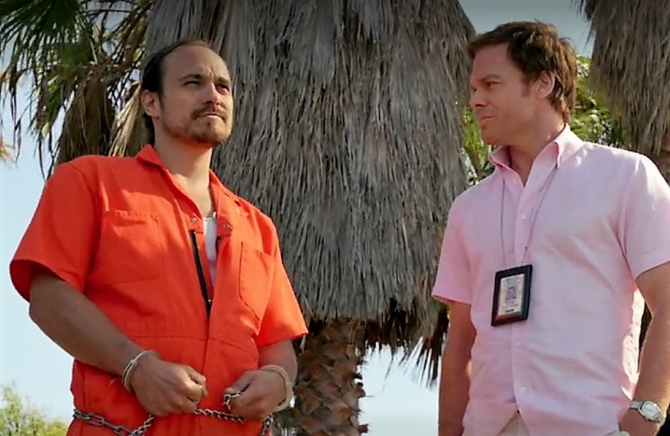 Suicide - Jumped in front of a truck

At least 7 (including himself, directly)
At least 1 (indirectly)

He took his girlfriend Hannah McKay on a 3-state killing spree. After he shot or stabbed his victims, he hid out in their motel rooms.

Buried the bodies near where they were killed

It is unknown why Randall went on the killing spree. Serving life imprisonment led to him "surrendering" to his situation. He offered to help police find the remaining bodies of his victims. However, his ultimate goal was to experience a few pleasures of life, such as warm sunlight and ice cream, before he killed one more person -- himself.

Wayne Randall is a character in Season Seven of the Showtime series DEXTER.

Wayne was the former boyfriend of Hannah McKay, the two having gone on a killing spree in 1997.

Wayne was a white male, approximately six feet tall, with dark brown hair, and a short beard. His apparel consisted of an orange prison jumpsuit, with white sneakers. He was always shackled.

Not much is known of Wayne prior to his temporary release under police supervision to help locate bodies. A bit was revealed when he and the police officers became irritated with each other.

During a conversation with Dexter, Wayne said that his conscience was buried under a lot of "Wayne Randall." He stated that he learned to accept his punishment. To this degree, Wayne appeared enlightened and at peace with himself. When Wayne committed suicide, Dexter believed that he didn't really care whether the police found the bodies, and that he only sought a few days of warm sunlight and ice cream from the Frosty Swirl.

Fifteen years ago, Wayne went on a three-state killing spree, taking Hannah McKay with him. Trophies were collected from all victims. After they were apprehended in Florida, Wayne was given two life sentences. Hannah (15-years-old) was cut a deal and placed in a group home, following her cooperation to turn state-evidence against Wayne.

Dexter Morgan looks into Wayne Randall's recent desire to reveal the location of three bodies he buried in Miami during a killing spree, fifteen years ago. Wayne claims it's to "clear his conscience." Dexter has a few conversations with Wayne while he's working as a forensic specialist at a possible burial site (in place of Vince Masuka). Wayne's seeming acceptance of his situation intrigues Dexter, who is dealing with his sister, Debra, who recently discovered that he's a serial killer.

After several days of fruitless digging, Frosty Swirls, and sunshine, Wayne reminisces on his time with Hannah McKay, feeling that she was a major part of his life that he can't get back. He says that each day with her was like Christmas Day, but she no longer cares about him and only thinks of him as a "killer." Wayne remarks that she's not wrong and he needs to kill "one last person." To Dexter's surprise, Wayne jumps in front of a tanker truck, spraying Dexter with blood. Debra runs back from the ice cream stand, dropping two Frosty Swirls. Dexter construes that Wayne could not handle life in prison...and wonders if he could.

Dexter is sprayed with Wayne's blood
Community content is available under CC-BY-SA unless otherwise noted.
Advertisement