He was a serial killer of prostitutes in Miami that Sgt. James Doakes was trying, but unable to arrest.

Dexter Morgan is working at his desk, when Doakes announces himself with, “Surprise, Motherfucker.” He asks for his reports and Dexter hands him photos of Mary King, the third victim of Walter Munro. Dexter informs Doakes that Mary was stabbed twenty-six times, with the first piercing her heart. Doakes says that Munro is crazy but smart, and he can’t get anything on him. Just then, Lt. Maria LaGuerta motions to Doakes to talk with him privately. LaGuerta returns a key to Doakes, apologizes, and walks away. Doakes suddenly notices Dexter standing nearby and swears at him. He tells Dexter, “You’re, like, invisible.”

Later, at a crime scene, Dexter exuberantly describes how a female victim was murdered in graphic detail, causing Doakes to look at him suspiciously. He tells Dexter to wipe the “fucking smile” off his face and that he likes this “bloodshit” too much. Dexter regrets letting his guard down, giving a Doakes a glimpse of his real self.

Sooner or later, Munro goes missing, which exasperates Doakes. When Dexter approaches him to offer a donut, Doakes says that he doesn’t want a "fucking donut." Then he mentions his regret in dating LaGuerta, and Dexter remarks, "Never jump the fence if you're not willing to face what's on the other side." Doakes asks Dexter where he heard that, because it’s a quote in Munro's journal, which has been locked up in his desk drawer for two weeks, ever since he obtained it serving a search warrant. Dexter says unconvincingly, "A friend said it to me in a moment of stress." However, Doakes doesn’t buy Dexter’s explanation and he doesn’t believe in coincidences. (It’s likely that Dexter heard it from Munro in his final moments.)

As Dexter begins to walk away, Doakes stands ups and states, “There’s something off about you, Morgan. I should have seen it before. The fake smile, the donuts. You don’t even walk like a normal person. You glide... like a fucking lizard on ice. It’s all a fucking act. And I ain’t buying it.” Dexter chuckles and tells him that he’s overreacting. Doakes stares at Dexter and says threateningly, “You’re hiding something. And one day I’m gonna figure out what it is. You are one creep motherfucker.” 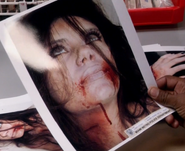