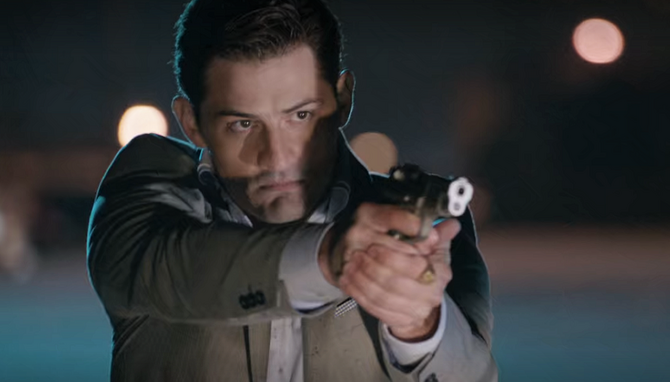 Head bashed in by Dexter Morgan.

Dating Isaak Sirko (until his death)

Baskov's motive for murdering the stripper is unknown, but when a cop came by trying to help change a tire and saw her body, Viktor killed him so that he couldn't talk

Viktor Baskov is a character in Season Seven of the Showtime series DEXTER.

He is an important member of the Koshka Brotherhood, and the man who killed Detective Mike Anderson.

Viktor is a tall man, with short brown hair and brown eyes. Like his lover Isaak Sirko, he wears nice suits and has a gun in his back pocket.

Viktor was a reckless man, as he was more than willing to kill a cop in cold blood to ensure that he didn't get caught. His subordinate, George Novikov, didn't like Viktor and called him impatient and impulsive. George really didn't care that Viktor was killed, and was more upset that Viktor shot a cop because the police investigation interfered with business. His boss, Isaak Sirko, faced off with George and insisted that Viktor was a good man, loyal, and committed to his job. This was proven true as Viktor didn't tell Dexter Morgan anything before he was killed.

Like Isaak, Viktor was secretly gay. In "Argentina," it's revealed that they were in an intimate relationship. Isaak cared deeply about Viktor and felt that he was the only person with whom he could be his true self. With Viktor dead, Isaak had nothing left but deep feelings of grief, anger, and a need for revenge.

Viktor was a member of the Koshka Brotherhood and had multiple arrests for weapons charges and immigration violations.

Viktor bludgeons a stripper named Kaja Soroka to death in the parking lot at The Fox Hole, one of the clubs owned by Isaak Sirko and managed by George Novikov. He stuffs her body inside the trunk of his car and drives off to dispose of her, but his car breaks down. At this point, Detective Mike Anderson stops to help him change a tire. Viktor tries to deter him, but Mike opens the trunk and finds Kaja's body. Immediately, Viktor shoots Mike to keep from being arrested. Viktor takes off in Mike's car, leaving his car, and Kaja and Mike's bodies behind.

Dexter finds Viktor's fingerprint in his vehicle and learns his identity through Interpol. He breaks into Viktor's apartment and finds blood and gunshot powder on a shirt. Viktor's computer shows that he that booked a flight out of the country, and Dexter is determined to kill him before he can leave.

Viktor arrives at Miami International Airport, and prepares to board the plane, but he decides to use the restroom first. Meanwhile, Dexter Morgan is on his trail and approaches Viktor in the bathroom, sedating him with M99.

Viktor wakes up in the airport's storage unit, strapped to a table with belts. He tries to pay Dexter off, assuming that he is a hitman for a rival organization. This doesn't work, as Dexter states that there is nothing that could save Viktor's life. Viktor then urges Dexter to finish him off and Dexter obligingly bludgeons him to death with a fire extinguisher. He ends up being dumped from Dexter's boat.

Viktor outside his car, with Kaja Soroka dead in the trunk

Viktor looks down at Mike

Viktor decides what to do next

Dexter and Viktor in storage room at airport