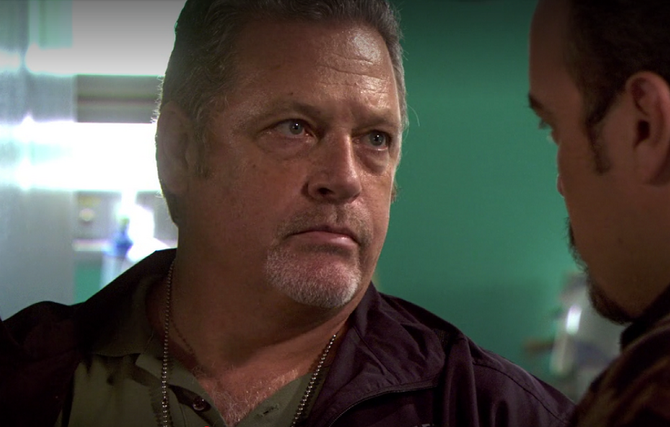 Vice Officer Jeffries is a character in Season Three of the Showtime series DEXTER.

He is a Vice Officer for the Miami Metro Police Department.

Angel Batista receives a call that his girlfriend, Detective Barbara Gianna, was attacked by a john. When he arrives at the hospital, two officers from Vice are standing outside her room. One of them is Jeffries. Angel holds up his badge and asks for Barbara. Jeffries nods toward the hospital room and says, “In there.”

Angel: “What do we know?”
Jeffries: “Not much. The meds for the pain have her pretty blurry. Hey! You that homicide guy she keeps talking about?”
Angel: “She talks about me?”
Jeffries: “She says you snore like a motherfucker.”

Angel finds Gianna lying in a hospital bed, with her head bandaged. She tells Angel that a john attacked her after he followed her home from the Stroll. She defended herself against him with her keys and now he may be a “little less handsome” They talk a bit more, and then Gianna is wheeled away for a CAT scan. After she has left the room, Angel takes her keys from the nightstand,

On his way out, Angel hands Gianna’s keys to Jeffries and they are bagged for evidence.

Angel: Detective Gianna thinks she got a piece of the assailant with these. Look for a blonde guy, tall, could be a john. Maybe one of your other decoys might have seen him.”
Jeffries: “We’re all over this. Thanks. Sergeant.”

Angel walks away, secretly putting one of the keys into his pocket.

At the station, Dexter Morgan finds Angel waiting in his office. Angel hands Dexter Gianna’s key and asks him to test it for blood and, if it comes back positive, to run it through the criminal database. Angel says that it’s a priority, for his eyes only.

The actor who plays Officer Jeffries is Jeff Lindsay, the author of the eight Dexter novels.
Retrieved from "https://dexter.fandom.com/wiki/Vice_Officer_Jeffries?oldid=111609"
Community content is available under CC-BY-SA unless otherwise noted.