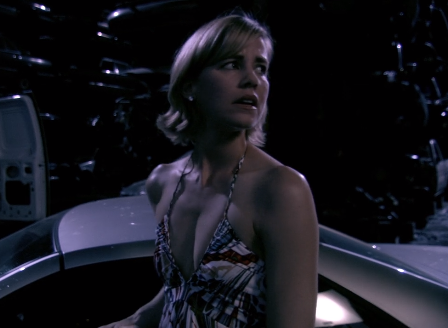 Valerie Castillo is a character in Season One of Showtime's series DEXTER.

Her husband, Jorge Castillo, transported Cuba migrants illegally to Miami. Jorge then locked them up in his auto yard until they paid him. If they couldn't, he took them out on his boat and drowned them.

Valerie is first seen at Jorge's house (when Dexter is stalking him), and Dexter assumes that she is unaware of her husband's activities. Later, after Dexter sneaks into Jorge's auto yard and sedates him, Valerie comes looking for him. When he observes her cruelty to the hostages, Dexter realizes that she is also involved in the coyote scheme and decides to kill her, along with her husband.

Dexter carries Valerie inside the trailer, where he is holding Jorge, wraps her in plastic and stuffs cotton into her mouth. Thinking of Rita, Dexter asks them how they make their relationship work when they're killers, like him. Valerie and Jorge tell him that they have the same dream. Dexter thanks them and replaces the cotton in their mouths. He then kills them by stabbing Jorge in the chest and slicing Valerie's carotid arteries. Dexter doesn't have time to dismember Valerie's body and simply throws it into the ocean.

The Ice Truck Killer, who has been stalking Dexter, dives after her body and places it back inside the trailer, in the same spot where Dexter killed her. The next morning, Dexter and his co-workers arrive at the crime scene and examine her body. This leads Debra to believe that she was murdered by a copycat killer. Masuka discovers that Valerie was drugged by M99, forcing Dexter to delete his alias from Masuka's email..

Dexter is worried that her corpse will lead to him being caught. That night, he has a rare nightmare. Her corpse is seen on the table in a kill room, alongside Harry. Her corpse comes alive and stands up. She and Harry both walk out of the kill room. Valerie is then replaced with Dexter himself, with Debra being the killer. She accuses Dexter of not telling her what he is, and takes his blood sample. Suddenly, a mysterious person enters the room, holding the head of a doll. Debra readies a cleaver and beheads Dexter, causing him to awaken.

Later, The Ice Truck Killer breaks into Dexter's apartment and draws a smiley face on Valerie's slide. When Dexter goes through some of his blood slides on his boat, he notices this. He understands that The Ice Truck Killer is actually testing him. Dexter then falsifies evidence, which leads investigators to believe that Valerie was killed by her husband, Jorge.

Killing them was done by her husband but whether she helped him or not is not stated.

Valerie's first appearance, in front of their house, seen via Dexter's camera

Valerie on a kill table

Valerie and Harry in Dexter's dream
Add a photo to this gallery
Retrieved from "https://dexter.fandom.com/wiki/Valerie_Castillo?oldid=104886"
Community content is available under CC-BY-SA unless otherwise noted.