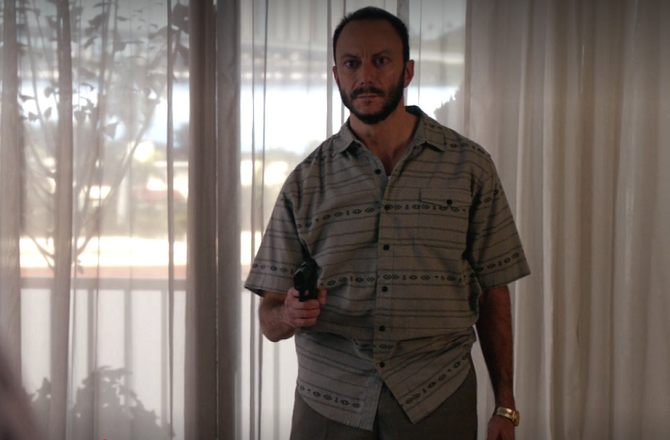 Unnamed hitman is a Character in Season Seven of Showtime's series DEXTER.

He was hired by George Novikov to kill Isaak Sirko.

From a car outside Sadie's Donuts, Isaak Sirko shoots through a window at Dexter Morgan who is buying donuts. Isaak narrowly misses him when Dexter happens to reach down at that moment. Francisco suspects it is a another gang-related shooting. However, Dexter knows it was Isaak trying to kill him.

Before Isaak can make another attempt on his life, Dexter breaks into Viktor Baskov's apartment, where Isaak is staying. He plans to kill Isaak and leave his body there, in the hope the police will blame the Colombian cartel. As Dexter walks around the apartment, he runs into a hitman who was hired to kill Isaak. When the hitman asks Dexter who the hell he is, Dexter answers that he is the "building super," there to fix the faucet. However, the hitman notices Dexter's gloves, pulls a gun, and retorts that he is the "Avon lady." Meanwhile, Dexter is slowly moving toward him. The hitman, realizing they both want to kill Isaak, states that he isn’t going "halfsies." Although the hitman has a gun, Dexter easily gains the upper hand, and slashes his throat. He jokes afterward, "We could've just gone halfsies."

The next day, Isaak and Jurg Yeliashkevych enter the apartment and discover the hitman's body. Jurg informs Isaak that he is one of George Novikov's men. Isaak knows George wouldn't have hired him without permission from the Koshka Brotherhood in Kiev, and deduces there is now a price on his head. Jurg brings in the cops who are assigned to follow Isaak, and soon the Miami Metro Homicide team arrives to investigate the crime scene.

After Dexter describes how the hitman was killed, Isaak taunts him with, "My, my. You couldn't have described that better if you'd been there yourself." He then gives Dexter a knowing look. Dexter says nothing but, "Thanks" and departs, leaving the rest of the investigation to Vince Masuka.

Dexter describes hitman's death
Add a photo to this gallery

Retrieved from "https://dexter.fandom.com/wiki/Unnamed_Hitman?oldid=105193"
Community content is available under CC-BY-SA unless otherwise noted.