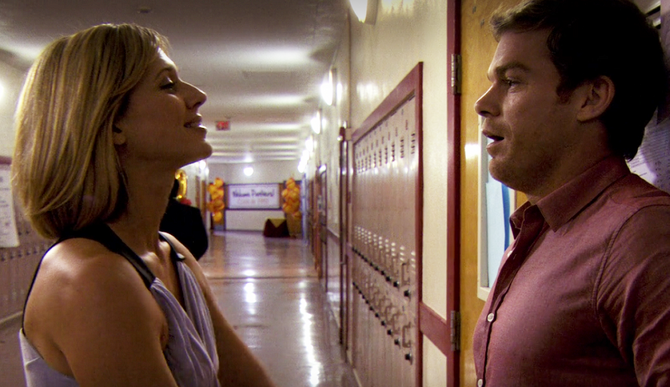 Trisha Billings is a character in Season Six of the Showtime series DEXTER.

She is a former classmate of Dexter Morgan, who sat behind him in biology class.

Trisha is an attractive blonde in her mid-30s (though she appears younger than most at the reunion), displaying a tan complexion with a bright smile. She often uses her body language to detail her interests, specifically in Dexter's direction. Her body itself is fit and slim underneath the clothing.

Trisha (like Dexter) arrives at the reunion, looking better than she did in high school. As soon as she spots Dexter, she begins to flirt heavily with him. After her encounter with him, she plays meet and greet with everyone else (and apparently, turns down Joe Walker's advances).

Trisha was the prom queen back in high school, suggesting that she was one of the most popular girls and wouldn't have associated with someone like Dexter. However, she now finds him attractive and makes advances toward Dexter (while he's attempting to entrap Joe for a kill). Trisha discloses to Dexter that, in high school, she used to sit behind him and copy off his work, which helped her get good grades, and she wants to pay him back.

She begins kissing Dexter, forcing him into a classroom where she openly drops her dress (revealing that she's wearing nothing but panties). She proceeds to give him oral sex on one of the tables. After she finishes, she jumps up as happy and perky as ever. She slips on her dress, smiling at Dexter. Then she walks off with purse in hand (not realizing that Dexter had stolen her cell phone for the purpose of luring Joe Walker into a trap later). 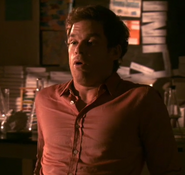 Trisha thanks Dexter with oral sex