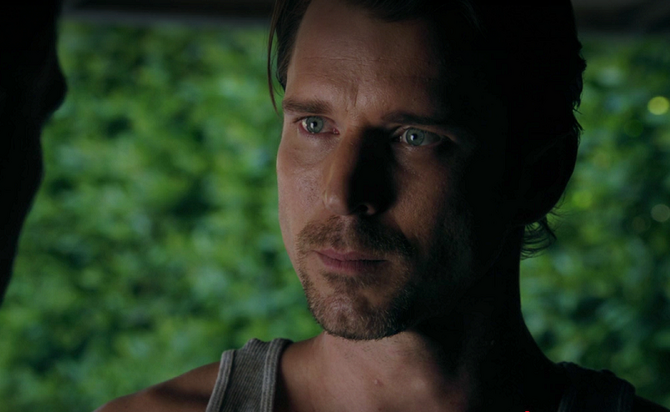 Stabbed through the eye by Isaak Sirko

The Fox Hole
Tony Rush is a character in Season Seven of Showtime's series DEXTER.

He was a bouncer who worked at The Fox Hole, a strip club.

While working at The Fox Hole, Tony started to date one of the strippers named Kaja Soroka. One night, Kaja left the club with a man named Viktor Baskov and ended up in the trunk of his car, killed by him. After Tony heard about her death, he quit working at the club.

Eventually, Tony was brought in by the police in regards to her murder, as well as the murder of Detective Mike Anderson. During questioning, he admitted that he was Kaja's boyfriend, and leaked Viktor's name.

Soon after, Tony was paid a visit by Isaak Sirko and his associate, Jurg Yeliashkevych, to discuss the murder of Viktor Baskov. Tony insisted that he had nothing to do with his death, but revealed that he gave Viktor's name to the police. Isaak then stabbed Tony in the eye with his own screwdriver, killing him.

Tony meets his end at the hands of Isaak Sirko
Community content is available under CC-BY-SA unless otherwise noted.
Advertisement