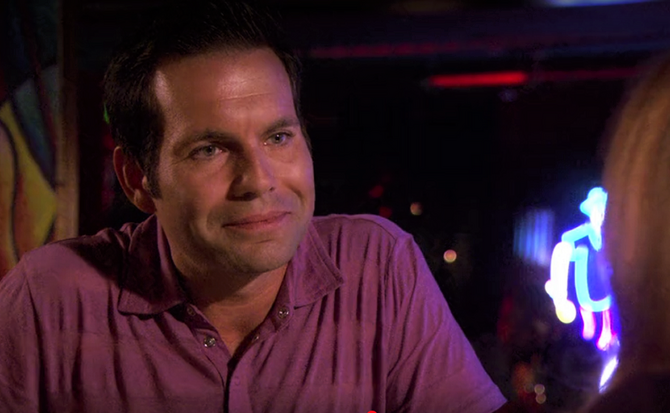 I Had a Dream

Bartender
Toby Edwards is a character in Season Three of the Showtime series DEXTER.

He is a bartender who was briefly suspected of killing Ellen Wolf.

After Lt. Maria LaGuerta and Ellen Wolf attend a boring police charity event, they decide to have fun and go to a bar. Toby is the bartender and Ellen begins to flirt with him, saying he is “hot” and she’d like his “big, gorgeous hands” to give her a foot massage. Toby is very friendly in return.

After Ellen is found dead in a cemetery, Toby is aggressively questioned by Maria at the police station. When he professes his innocence, Maria brings up his behavior towards Ellen in the bar. Toby says that Ellen came on to him first and he flirted back because it’s a way to earn tips. He mentions that Ellen left him $20 on a $30 tab.

Maria confronts him with evidence that he called Ellen at 11:10 p.m., 3:01 a.m., and 3:08 a.m., with the last two calls routed through a cell phone tower a block away from Ellen’s house. Toby claims he wasn't forthcoming because he didn't want his fiancee to know about his attempted "booty call." He admits that, at her invitation, he went to Ellen's house hoping for a one-night stand, but she didn't answer the door or her phone. He figured she fell asleep and left.

Meanwhile, Miguel Prado (the real killer) is listening to the interview on a camera, hoping to pin Ellen’s murder on Toby. Dexter Morgan is with him and states that Toby is not the killer. When Miguel suggests he could be, Dexter tells Miguel that he has a problem with the word “innocent” and that Toby won’t be framed.

Maria pegs Toby as Ellen’s murderer until Det. Joey Quinn takes her aside and informs her that Toby has an alibi. Four people verify that Toby was at the bar during the time that Ellen was killed, and security footage with a time code confirms that he closed out.

Maria returns to the interview room and presses Toby for more details. He remembers an important clue. Although he didn't see Ellen, he did observe a dark-colored SUV with bright headlights driving away. He describes the driver as a “douche bag” who blinded him with “big-ass halogens.”

The investigation into Ellen’s murder continues, and Maria re-watches the tape of her interview with Toby. This time, when she hears the description of the suspect’s vehicle, she begins to have suspicions of Miguel. She realizes that he hated Ellen, has no alibi for the night of her murder, and drives a matching SUV. Maria sets out to confirm Miguel’s guilt, only confiding in Dexter.

Ellen and Maria in bar

Discussion of case
Community content is available under CC-BY-SA unless otherwise noted.
Advertisement