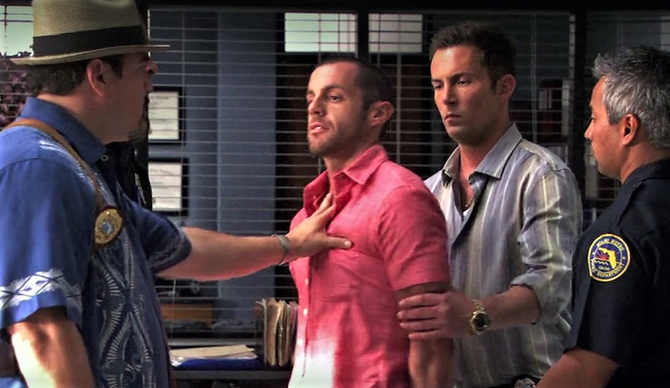 He chose South and Central American women that immigrated to the U.S. After Farrow finished taking pictures of them, they would leave. However, Timothy called them back to the studio, presumably under the ruse that Farrow had more work for them. He then bashed them over the head and killed them.

Timothy Brand is a character in Season Four of the Showtime series DEXTER.

He is a photographer's assistant and a serial killer. He is first seen while accompanying Jonathan Farrow to the police station as he books photo shoots on his phone.

Brand's final victim was Estrella Carazo. Her arm was found after a man killed and cut open an alligator. Evidence showed that she was murdered before her body was discarded in the Everglades.

Initially, the murder was believed by many, including Dexter, to have been committed by Brand's boss, Jonathan Farrow, a fashion and S&M photographer. It was only after Dexter killed Farrow that Brand was arrested by Sergeant Angel Batista on solid surveillance and DNA evidence. This disturbed Dexter because he had broken the Code of Harry and killed an innocent man.

Because Farrow suddenly disappeared, it was suspected (except by Dexter), that Brand had killed Farrow. After his arrest, Brand was not seen again.