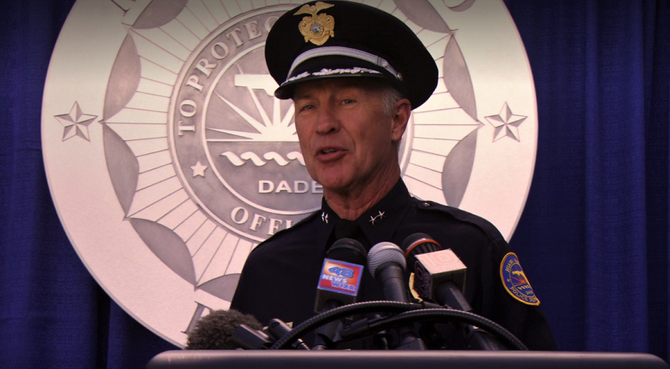 At the start of the series, Matthews is the Captain of Miami Metro Homicide within the Miami Metro Police Department. He acts as the direct supervisor for Lieutenant Maria LaGuerta who generally deals with the press. After the events of the Bay Harbor Butcher Case, he is promoted to Deputy Chief and deals with situations that are public relations issues.

Matthews is a Caucasian man in his 60s with blue eyes and tan skin. With age, he shows wrinkles in his face but his smile matches that of a man half his age. He has short, white hair that's combed to match his professionalism. He stands rather tall, often towering over his subordinates in Miami Metro especially compared to Maria LaGuerta.

He usually wears a professional business suit, dressed to match his high-grade position. Depending on the circumstance, he can be seen wearing his Badge around the neck as with many Detectives in Miami. If the situation calls for it, he dons a bulletproof vest.

Matthews' casual attire is corporate casual, mostly consisting of polo T-shirts and dress pants. While in an early retirement, he is seen wearing collared shirts with tropical themes, such as beaches and palm trees.

Matthews frequently clashed with Lieutenant Maria LaGuerta. At one point, he temporarily installed another Lieutenant in her place when mistakes made during the Ice Truck Killer Case publicly embarrassed him.

Despite his flaws and his own political ambitions, Matthews was a good man at heart, truly caring about the officers under his command and their performance in the field.

Over the years, Matthews promoted Debra from Vice to Homicide Detective and later to Lieutenant. He often voiced his opinion on whether Harry would have praised or criticized her actions. Debra admitted to viewing Matthews as almost a father.

As for Dexter, Matthews highly valued his intelligence and precise work. He refused to believe that Dexter was the Bay Harbor Butcher, and personally revealed to him all of Maria's suspicions. There was truth, however, in what Maria told Matthews, "You are letting your feelings for the Morgans cloud your judgment."

In a few instances, Matthews directed anger at the detectives for negative press or unsolved crimes. Whenever a high profile case was successfully resolved, he would take the credit, enabling him to advance in the ranks within Miami Metro.

After his wife's passing, Matthews began seeing call girls, stating to Debra that he had been lonely since her death. Debra commented that his late wife would be ashamed of him.

Before Season One, Matthews promoted Maria LaGuerta to Lieutenant following a successful bust by herself and Sergeant James Doakes. Ever since that promotion, Matthews and LaGuerta continually had conflicts, including over Debra's promotions or procedures followed in investigations. He also confronted LaGuerta when she refused to listen to Debra's hunches. During one encounter, Matthews told LaGuerta that he couldn't stand her because of her arrogance.

During the Ice Truck Killer Case, the press reported that Matthews was responsible for the arrest of Neil Perry. This angered LaGuerta as she was leading the investigation. She later told the press that Perry was a fraud and the real Ice Truck Killer was still at large.This resulted in Matthews retaliating by (temporarily) replacing LaGuerta with another Lieutenant.

In Season Six, LaGuerta blackmailed Matthews to promote her to Captain. Later, he was forced to retire after LaGuerta leaked information about his call girls. Nonetheless, Matthews proved to have some respect for LaGuerta as he commended her for outsmarting him, saying that she played the game well.

Matthews was one of Harry Morgan's closest, most respected friends, having known each other for years on the force. On the day before Harry committed suicide, he spoke with Matthews and asked him to watch over his children. Faithful to his word, Matthews kept watch over both Dexter Morgan and Debra Morgan through the years, despite the occasional conflict.

Captain Matthews is first seen with Lieutenant Maria LaGuerta during the investigation when Debra Morgan finds the Refrigerated Truck. He forces LaGuerta to promote Debra to Homicide despite her protests. He later shows his disappointment of Debra when she violates protocol by going to him over a case because LaGuerta ignored her ideas. Matthews then advises LaGuerta to listen to her officers when they voice their opinions.

When the first suspect is Tony Tucci, Matthews isn't sure of his guilt. However, LaGuerta insists (without all the facts) that Tucci is their guy, causing Matthews to snap at her, telling her to open her eyes and avoid embarrassment. Later, Matthews is present with Debra and Dexter at the closed hospital where Tucci is found alive.

Another suspect, Neil Perry, is arrested and Matthews takes the credit from LaGuerta, much to her anger. She later gets Matthews back by revealing to the press that Perry isn't the killer. This causes a furious Matthews to replace LaGuerta with another Lieutenant -- Esmée Pascal. LaGuerta is demoted to Detective for the rest of Season One.

Matthews assists in the Bay Harbor Butcher Case, soon introducing Special Agent Frank Lundy. He uses the case for his own benefit by disclosing information to the media, despite Lundy's attempts to convince him otherwise.

He gives LaGuerta her old position back as Lieutenant after Esmée Pascal's frantic behavior around the department, unaware that it was due to LaGuerta sleeping with Pascal's fiancé. However, Matthews butts heads with LaGuerta about Doakes and is irritated when she takes personal time to prove his innocence.

While Matthews is playing golf, Dexter unexpectedly approaches him. Matthews stops his game and tells Dexter to call him "Tom" since he is off duty. When Dexter questions him about Harry's death, Matthews reveals that Harry killed himself. Dexter finds it difficult to accept and Matthews tries to comfort him.

When the first blood slide box is found, Matthews demands answers from Dexter. He states that Doakes is the Bay Harbor Butcher, which is a welcome surprise to Dexter. The entire department is left shocked by the news, except for LaGuerta who refuses to believe it

Matthews is present when Doakes' body is found at the cabin, and believes the evidence is enough to close the case, much to Dexter's relief. When Debra and Batista are given awards for their efforts in the BHB case, Matthews is present at the ceremony.

Matthews does not appear in this season, nor was he mentioned by anyone within the department.

Matthews is mostly seen in conflicts with LaGuerta over the Trinity Case and her growing relationship with Batista. However, she defies Matthews and the two marry each other which angers him. This prompts LaGuerta to snap back, asking why he is always against her. Matthews reveals that it is her "arrogance.'

After Debra's shooting, he expresses his relief that she will recover.

Matthews isn't seen much, other than providing criticism in the Santa Muerte Case and support in the Barrel Girls Case. He is present at the funeral of Dexter's wife, Rita Morgan.

When LaGuerta is promoted to Captain, it is revealed that she blackmailed Matthews into promoting her. When the position of Lieutenant is then offered to Batista by LaGuerta, she is thwarted by Matthews. Due to Debra having busted a perp during a shoot-out, Matthews let her have the position instead. LaGuerta does not take this kindly and warns him that it will blow up in his face. After Debra's first press conference (that she believes she screwed up), Matthews reassures her that the public likes her honesty and directness, which delights Debra. Matthews tells her to keep up the good work.

Matthews has an accidental hand in the death of a call girl named Jessica Morris. Through Captain LaGuerta, he attempts to keep this quiet in order to protect his career and reputation. Even so, during the investigation of the Dead Call Girl Case, newly promoted Lieutenant Debra Morgan discovers that Matthews is involved in Jessica's death. Matthews calls for a dinner with Debra and they talk about the case. He confesses to being with the call girl when she died and asks for Debra's help to keep him out of it. Debra, grateful for her promotions, reluctantly agrees. However, LaGuerta soon betrays Matthews and uses the information to have him forcibly retired. Despite Debra stating that she would never sell him out, Matthews accuses Debra of costing him his job due to her persistence in the case. Debra then confronts LaGuerta for using such a low tactic for her own personal gain.

Matthews is seen on his boat drinking scotch as he sarcastically greets an uninvited LaGuerta. She confides her belief that The Bay Harbor Butcher is alive and well. Matthews doesn't believe it, stating that the evidence was overwhelmingly against Doakes. He shows a bit of interest after hearing that a blood slide was found at Travis Marshall's' church site. Although reluctant, Matthews agrees to help LaGuerta investigate after making her promise to get his job back, including his 40-year pension.

As they dig into the case, they revisit the cabin site where Doakes died. They discover that Santos Jimenez had rented the cabin. This prompts Matthews to remember that Jimenez was responsible for Dexter's mother's death. He is also aware that Dexter's brother, Brian Moser, was The Ice Truck Killer. When LaGuerta learns of Jimenez's disappearance and Dexter's background, she immediately believes that Dexter set up James Doakes and Dexter is the true Bay Harbor Butcher. Matthews, however, prevents LaGuerta from questioning Dexter. He states that he will do it, having known Dexter since he was a boy.

Matthews asks Dexter to his boat and begins to ask him subtle questions. He confides that LaGuerta thinks Dexter is the Butcher. Dexter soon realizes that Matthews is interrogating him. Thinking quickly, Dexter makes up a story about a non-existent boat owned by Doakes that he docked at the Coral Cove Marina.

Matthews tells LaGuerta about the boat but she doesn't believe him, stating she would have known if Doakes had one. They find a tackle box from the cabin holding a key to an old boat storage building. They search the area and find sheets of plastic, knives, and one of Doakes's fingerprints. This convinces Matthews to believe Dexter, but LaGuerta states that Dexter could have planted the evidence (which is true). Matthews scoffs at her and tells LaGuerata to move on. Afterward, Dexter visits Matthews and is assured by him that LaGuerta accepts his innocence.

LaGuerta keeps her word to Matthews and he is reinstated, but she continues to pursue Dexter.

Matthews and the rest of the Miami Metro Police Department are present at LaGuerta's memorial. After Batista's speech, Matthews ends the memorial by presenting a bench, made in honor of Maria LaGuerta and her service to Miami.

In the novels, he is known as just Captain Matthews, and was a friend of Harry Morgan. He is described as being vacuous and vainglorious, someone seeking out the media and wanting good press. He shows some friendliness to Dexter Morgan and Deborah Morgan, including in the first novel, Darkly Dreaming Dexter, when he brings Deborah into the Homicide Squad, similar to how the first TV episodes played out.