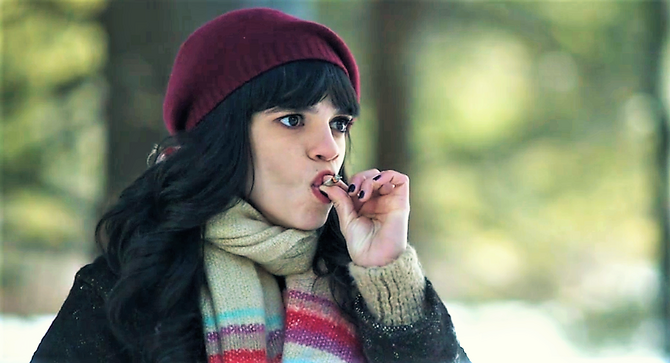 She is a school science teacher who also works part time at the local tavern.

The locals gather at Iron Lake Tavern for line-dancing, and Dexter (as Jim) heads to the bar to get drinks for himself and Angela. Tess, a school teacher, is bartending and he asks, “You're working on a school night?” She explains, “School has finals all week. Ergo, I don't have to grade anything. So, picking up some extra shifts before the holidays.”

Before Dexter can order, Tess asks, “Chivas, rocks. IPA. And a veggie nachos?” He wants to know if he’s that predictable and Tess jokes, “Want to shake it up? I got a pickleback special.” Dexter chuckles and says, “No. We're good. Uh, just put it on my tab.” Tess says there’s no need because Matt Caldwell is buying everyone a round. Dexter looks over at Matt who pounds his table and repeatedly shouts, “Jim! Jim! Jim! Jim!” as his friends join in. Dexter tells Tess to put his drinks on his own tab, anyway.

Later, Angela overhears an unknown young woman at the bar ask Tess, “How much is a plain burger, without cheese or anything? What if I don't get fries?” Tess answers, “It doesn't come with fries, honey.” Angela tells Tess to put the burger and fries on her tab and the girl, whose name is Lily, thanks Angela. Lily confirms that she’s not from Iron Lake and will be taking the first bus out the next day, thus needing the fare. Concerned about the area’s missing girls, Angela gives Lily some money and tells her about the shelter down the road run by Desiree.

Tess shows up at Dexter’s place to help with the search for Matt Caldwell. Dexter catches her smoking a joint and she gives him the peace sign. Dexter returns it.

At home, Dexter confronts Harrison after he finds the hidden straight razor. Harrison becomes defensive, storms out, and goes to a party with Zach and Scott.

Since Angela is in Manhattan at a police conference, Dexter goes alone to Iron Lake Tavern. He orders whiskey instead of his usual beer, explaining to Tess that he's in the mood for something stronger.

Tess asks how Harrison is doing, saying it can't be easy for him knowing that he hurt someone. Dexter thinks, Or maybe it was too easy. She suggests a therapist over in Fort Drum who might help Harrison if there are things he's not ready to talk to his dad about. Tess writes down the name and Dexter thanks her.

A jovial Kurt Caldwell enters the tavern and shouts, "Let’s have a party!" He heads to the jukebox and plays the song "Runaway" by Del Shannon. Dexter asks, "What's with him?" Tess answers, "He gets like this every couple months. Walks in here like he owns the place. That same song. Always that same fucking song." They watch Kurt as he dances by himself, smiling.

Then Tess remarks, "Wait for it. He's gonna come ask me to dance in four, three, two…" Sure enough, Kurt motions to Tess, who chuckles and joins him. Dexter thinks, Look at him. His son reduced to ashes, and there he is, dancing like he doesn't have a care in the world. Either he's crazy, or I am.

Tess attends the school wrestling match and calls Jim (Dexter) over to the good seats where she is. She asks about how Harrison’s therapy is going.

Tess shows up at Jim's burned down house to help.

Later on, Harrison goes to the bar and she gives him a hotel room to stay in after his dad was arrested.