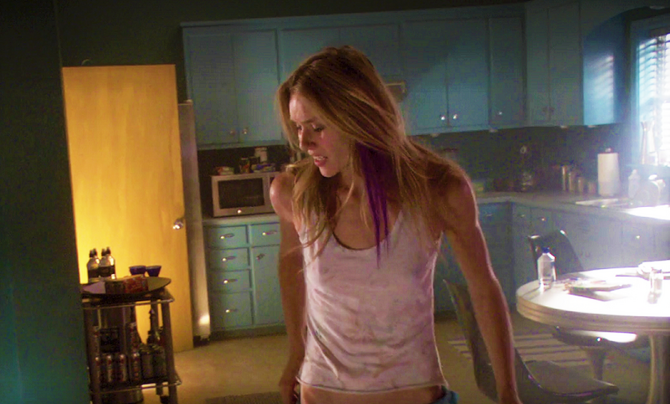 She is a drug user and prostitute who is murdered by a serial killer known as The Skinner. Teegan is the first victim in the Skinner Case.

Teegan is a thin, young woman with long, blonde hair (with a purple streak). She is briefly seen wearing cheap, unwashed clothes.

Not much is known, but Teegan is quick to anger if she doesn't get her next hit. Her boyfriend is a drug dealer named Fred Bowman, aka Freebo.

She used to attend college, living on campus, until she got hooked on heroin. A pimp named Javier Garza tried to turn Teegan out by sleeping with her, but be failed. He then gave Teegan to Freebo.

Dexter Morgan begins to stalk Fred Bowman, aka Freebo, because he killed two college girls, dumped them in the Everglades, and got off on a bad warrant. Pretending to be a junkie, Dexter gains entrance to Freebo’s house through Wendell Owens, his doorman. While he is interacting with Freebo, Teegan enters the room, asking for a hit. Freebo rudely blows her off and tells her that he's conducting a transaction. Teegan yells that his dick can suck itself, and storms out of the house. This is the last time that Teegan is seen alive.

Later that night, Dexter beaks into Freebo’s house to kill him, but unforeseen events lead to Freebo fleeing and Dexter killing Oscar Prado during a struggle instead. The next morning, the police find drugs in Freebo’s house, and suspect that he killed Oscar.

Teegan’s corpse is found and reported by two prostitutes. When the police arrive, she's lying face down on The Waterfront Stroll, a hooker hangout. Dexter recognizes Teegan after Vince Masuka turns over her body. A piece of flesh had been cut from her shoulder (in the shape of a square), and she was strangled. Dexter doesn’t reveal Teegan’s name and she's considered a Jane Doe for the time being.

At this point, the entire homicide team, including Dexter, thinks that Freebo killed Jane Doe. (They eventually learn that it was The Skinner.)

In his hunt for Freebo, Dexter runs Teegan's driver's license and it lists her address as a college dorm. When he arrives, he makes his way through a a kegger party. Dexter learns that Teegan no longer lives there, and obtains her new address from two stoned girls. He then breaks into Teegan’s place, and discovers Freebo hiding out there. He sets up the detached garage as a kill room, captures Freebo, and takes his life by stabbing him in the neck with a bayonet. Immediately after, Miguel Prado catches Dexter with the weapon and blood on his hands.

Javier Garza, a pimp who previously talked to Debra about Freebo, is found dead with skin removed from his body.

To help Debra, Dexter creates a missing person flyer with Teegan’s photo and name. He hangs it up where Debra can see it, and she finally notices it. Now that Debra knows Jane Doe’s identity, she discovers that Teegan was Freebo’s girlfriend.