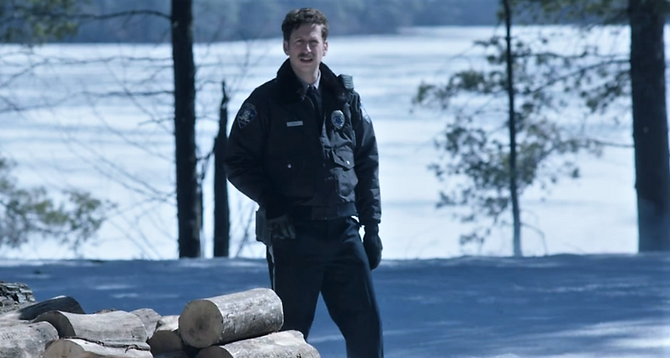 He's been a police officer in Iron Lake for two and a half weeks. Good-natured, quirky, hardworking, eager to please; and a little scared of his boss, Police Chief Angela Bishop. At first glance, he seems timid and inexperienced, but when the rubber hits the road, he’s a dependable badass…in his own way.[1]

At Angela’s request, Esther the dispatcher, asks Teddy to handle a sheep crisis. However, Teddy shakes his head as he holds an ice pack to his jaw. Esther tells Angela that he is out of commission due to having his wisdom teeth pulled.

Later, Dexter (as Jim) walks over to the police station to see Angela and spots Teddy with the ice pack. He asks how he’s feeling and Teddy mumbles, “Been better.”

Sergeant Logan and Esther are discussing Matt Caldwell after a hold was put on his purchase of a gun. Esther speculates that it was his boating accident in Ohio when five people died. “Shit,” says Teddy.

After Matt Caldwell goes missing, the police set up a base camp outside Dexter’s cabin. Teddy addresses Dexter, “Don't worry, Jimmy. Dude probably got wasted and skipped the hunt. We'll get a call he's sleeping it off in some motel and be out of here by lunch. Sergeant Logan overhears Teddy and remarks, “Or he could be out there, freezing to death.”

Dexter had used the tarp on his woodpile for Matt’s kill room, and Teddy notices that it’s missing. He calls out, “Yo, Jimbo! Wood's gonna rot if you don't cover it with a good tarp.” Dexter responds dismissively, “Yeah, I'll get right on that.”  Teddy continues. “Well, hell, Jim, you got 'em at your own store. Just pick up a good canvas one. As long as there's wax on it. Or a polyurethane one, yeah?" Dexter thanks him for the tip and goes inside his cabin.

At the station, Angela calls Jim (Dexter) into the conference room where Sam from Wildlife Management is waiting with Teddy, Sergeant Logan, and Kurt Caldwell. Angela asks Jim to clear something up and he says that he's happy to. Sam turns on a screen with heat signature footage of someone in the woods. Teddy thinks it is "pretty cool." It confirms that Matt shot the deer, but there is also another unidentified person in the footage. Angela instructs Teddy to contact tribal police, call Albany to get CSI, and secure the crime scene ASAP.

Several K-9s and their handlers arrive at the crime scene. Teddy is startled when he bends down to Rusty's dog and it barks at him. Sternly, Rusty orders, "Yo! Yo, yo, yo. No touching. They don't need no confusion with your petting."

Dexter is alerted of a school lockdown that involves Harrison and speeds to the school. He bursts through the doors and sees Ethan Williams being wheeled out on a stretcher.

As Dexter pushes past the crowd, Teddy blocks his way and “Jim” demands to know where his son is. Teddy says he's being worked on and rushes Dexter to Harrison, who is being treated for a stab wound. Harrison assures Dexter it's not that bad and Alan, a paramedic, confirms that it isn't very deep.

Harrison explains that Ethan was planning a school shooting and asked Harrison to do it with him. When Harrison refused and tried to get him some help. Ethan stabbed him. Harrison tackled him to get the knife out of his hands and cut his leg, which caused Ethan to pass out from loss of blood. Sergeant Logan searches Ethan's backpack and finds the violent graphic drawings and a kill list.

The police arrive at Crystal Bar just as Dexter is attempting to inject Miles O'Flynn, a drug dealer, with ketamine He quickly changes to Plan B and begins to beat up Miles, yelling to leave his son alone. Sergeant Logan pulls Dexter away and orders him to calm down. Teddy handcuffs Miles and he’s taken to the police station, with Jim [Dexter] following to fill out paperwork.

While an impatient Dexter is waiting at the station, Teddy approaches and says, "Hey, Jim. Really sorry about all this. It's just a formality. Coffee?" Dexter replies, "No, thanks" while thinking The worst coffee in Iron Lake.

As Logan leads Miles into the interrogation room, Dexter changes his mind and remarks, "You know what, Teddy, I will take that cup of coffee, actually." Teddy tells him to help himself and Dexter pours a cup. Then he sits down in a spot where he can overhear Logan and Miles.

Angela asks Teddy go to the Clarke caves to look for bodies and Teddy agrees. They find a pile of rocks that looks manmade. Angela crawls into an open space and finds another bigger cave. She finds a body and screams to Teddy to get in here now. They find Iris’ body.

Teddy in cave where Iris is found