She played Francis, a file clerk for the Miami Metro Police Department, on Showtime's DEXTER.

Her TV credits include CSI: Miami; Strong Medicine; What About Brian; Everybody Hates Chris; If Loving You is Wrong; Conan; The Haves and the Have Nots; and Meet the Marks.

Sherel was born and raised on the south side of Chicago, Illinois. She studied cosmetology in her local community college. During her community college years, Sherel worked at a Hair Care Company. When she filled in for a no-show model, she realized that she enjoyed the work. She then moved to New York City to begin her acting career, subsequently moving to Los Angeles 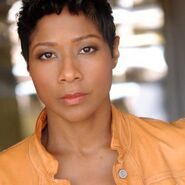