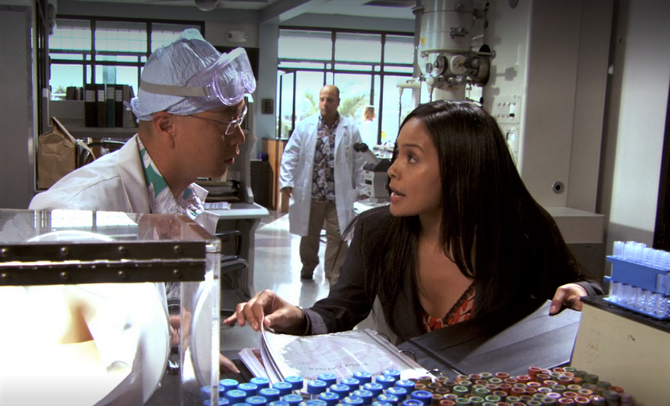 Go Your Own Way

Tammy Okama is a character in Season Three of the Showtime series DEXTER.

She is a party planner who organized Dexter Morgan's bachelor party, and briefly dated Vince Masuka.

During Vince Masuka's frustrations over planning Dexter's bachelor party, Joey Quinn gives him Tammy's number and they soon meet at the station to plan the event. Tammy and Vince hit it off while deciding that Dexter will have a party on the sea on the "Party Boat." She arranges for strippers and organizes everything else, including food and drinks.

The next day, Vince tells Angel Batista that after the party, he and Tammy had sex and spent the night talking. Angel runs a background check on Tammy and tells Vince it's bad news. Tammy ran her car into someone over a parking space, ending with a big fine and anger management. Instead of deterring Vince, he seems pleased that she "has issues" and is not out of his league, Angel shakes his head and says, "Happy to help."

Vince continues to date Tammy and even invites her to Dexter and Rita's wedding. This is the last time she is seen in the series.

Vince and Tammy at party
Community content is available under CC-BY-SA unless otherwise noted.
Advertisement