Sword of John the Revelator is a religious object in Season Six of Showtime's series DEXTER.

The weapon is an ancient artifact that, according to Medieval legend, belonged to John the Revelator, the man who supposedly wrote wrote the Book of Revelation. Through the years, this blade came into possession of the University of Tallahassee, where a Professor James Gellar presided as a teacher in religious studies. The sword itself was made of rust-stained iron, with a golden handle and grip. It had slight indentations on both sides of the edge.

One of Professor Gellar's former students, Travis Marshall, pilfered the sword in early 2008. Professor Gellar was blamed for stealing the artifact from the University and lost his job. Additionally, Gellar was faced with the delusional Travis, who approached him with the claim that they were the Two Witnesses. Geller refused to accept this notion.

Shortly thereafter, Travis, claiming that he could prove that they were the Two Witness by their inability to die. He pierced Gellar's chest with the blade directly in the heart, thus killing him. Travis then hid Gellar's body in a church freezer and shut out the memory. He continued to believe that his professor was still alive as the second Witness, until Dexter proved to him that Gellar was dead.

Although Dexter had the Sword of John Revelator, he used his own knife to kill Travis in the church.

Killed by the Sword

Killed Without the Sword 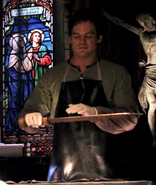 Dexter holds the Sword
Add a photo to this gallery
Retrieved from "https://dexter.fandom.com/wiki/Sword_of_John_the_Revelator?oldid=101517"
Community content is available under CC-BY-SA unless otherwise noted.