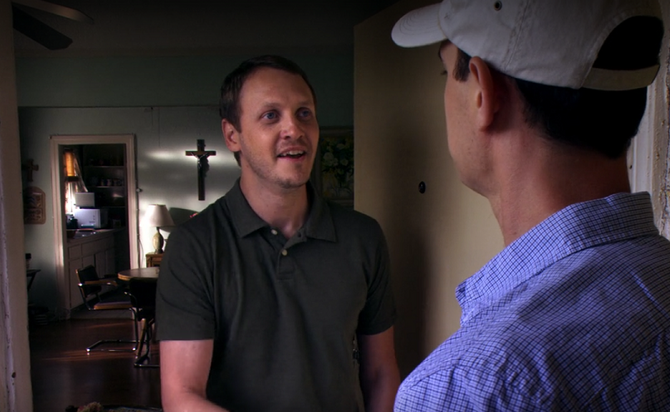 Steve Dorsey is a character in Season Six of Showtime's series DEXTER.

He was a frequent poster on Professor James Gellar's website, under the name Doomsday_Adam.

Steve (under the username Doomsday_Adam), is a devoted follower of Professor James Gellar’s website (taken over by Travis Marshall). The site is appropriately named The Beginning of the End, and functions as a blog for entries relating to the End of Days. Both Steve and his wife, Beth Dorsey, believe that the end of the world is nigh.

Louis Greene shows the detectives the recent blogs on The Beginning of the End website. One of them is by Doomsday Adam, who writes, “Professor Gellar, I support your quest. I’m inspired by your courage and faithfully follow you to the end.” Louis offers to track down the location with the IP address.

After Travis Marshall reads one of Steve’s supportive blogs, he pays a visit to their home. The Dorseys are honored and welcome him with great respect. Travis tells them that their time has come and the faithful will be given untold riches in God’s new kingdom...if they trust and obey. Steve says they are ready and will do whatever he says. Travis states that he first needs to know if they are “fully committed.” Beth sits quietly, slightly bewildered by Travis’s comments.

Travis takes Beth and Steve to the Ricochet Rabbit (yacht) and, when Holly Benson arrives, they capture her. After Holly is gagged and tied to a chair, Travis reveals they’re going to kill her. Although Beth believes that Travis is carrying out “God’s plan,” she balks at murder. Travis reassures Beth, saying that Holly is a whore; they will be purifying her sins, and her soul will know paradise. Beth whimpers and reluctantly nods. First, Travis slashes Holly’s throat, then Steve stabs her in the chest. Her body is fastened to the anchor and lowered into the water.

Steve stays alone on the yacht to clean up. He puts on a hazmat suit because of the dangerous chemicals used to prepare Wormwood. Dexter Morgan finds the yacht and, thinking that Steve is Travis, boards the yacht and attempts to inject him with M99. However, Steve notices him, and grabs a knife. A struggle ensues, which results in Dexter stabbing Steve in the upper abdomen. Dexter throws him to the floor and removes his mask. It’s revealed he’s not Travis which infuriates Dexter. With his last breath, Steve tells Dexter that he is too late, and Wormwood can't be stopped. He then dies on the floor of the yacht. Dexter discovers the chemicals and anonymously calls 9-1-1.

Miami Metro Homicide arrives at the yacht where they find Steve and Holly’s bodies, dangerous chemicals, and a knife with Travis’s fingerprints on it. Debra Morgan asks Dexter what happened to Steve and he describes the scenario perfectly (minus his involvement). Steve is recognized by Debra as Doomsday Adam, with Louis Greene stating that Steve had blogged yesterday about being “chosen to be a soldier in the final battle.” Louis says he told Angel Batista, who took Steve’s address.

Angel goes to the home of the Dorseys where he is captured by Travis. Because Angel is not answering any calls, Joey Quinn is ordered to check on him. Quinn finds Angel tied up in a burning bedroom. He is able to rescue Angel, but Travis escapes. Meanwhile, Beth is on her way to Miami Metro Homicide with Wormwood in a backpack. 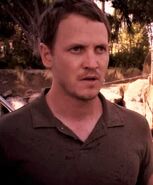 Beth and Steve listen to Travis

Steve and Beth after Holly is murdered

Books in the Dorsey home

Dexter furious that Steve wasn't Travis Marshall
Add a photo to this gallery
Retrieved from "https://dexter.fandom.com/wiki/Steve_Dorsey?oldid=104880"
Community content is available under CC-BY-SA unless otherwise noted.