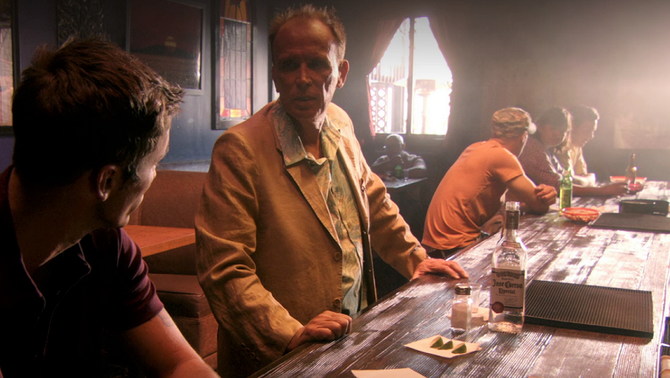 Stan Liddy: (Former) Corrupt Narcotics Cop; The One Who Got Too Close

He is a corrupt police officer in the Miami Metro Narcotics Division. He is first seen while being arrested during a sting operation. During his suspension (and eventual termination), Liddy focuses on uncovering Dexter's secret, after he is hired to investigate him by Joey Quinn.

Liddy is a man in his early 60s. He has thinning gray hair, piercing blue eyes, and a low, distinctive voice. He frequently wears boldly printed Hawaiian shirts.

Liddy is an eccentric character. He holds an easy-going attitude around those he likes, but quickly reverts to a tough-cop persona when needed. In reality, Liddy is selfish, arrogant, miserly and manipulative and, at times, cold-blooded and threatening.

He develops an obsession with uncovering Dexter's secret, so much so that he illicitly enters the Miami Metro Police Department, signs out surveillance equipment under Joey Quinn's name, and then illegally sets it up in Dexter's Apartment. He persists even after Quinn fires him, believing that, if he proves Dexter is involved in criminal activities, he will gain his job back.

In order to clear Sgt. Angel Batista of a serious violation (for beating down Sergeant Lopez), Maria LaGuerta agrees to assist Jim McCourt from Internal Affairs in a sting operation to bust a dirty narcotics cop -- Stan Liddy. Due to her recent evasive attitude and late nights out, Angel assumes that his wife is having an affair with McCourt, He locates the motel where the sting is taking place, busts into the room, and starts to attack McCourt, thus almost ruining the operation. This causes a brief fight between the married couple. Liddy is shown handcuffed, sitting in the background.

Liddy is released while awaiting a hearing. He then has a few drink in a bar, while sitting next to Detective Joey Quinn. The two begin talking trash to one another, but in a friendly manner. Quinn brings up the fact that he needs to look into a guy. Liddy distrustfully warns him, saying, "If you fuck with the bull, you get the horn." The two stare off, and then they both laugh. Liddy asks the guy's name and Quinn tells him that it is "Dexter Morgan. Liddy remarks that "Dexter" is a weird name.

Liddy disapproves of Quinn being in a relationship with their target's sister.

After checking Dexter's background, Liddy is convinced that Dexter is dirty, because his background is simply too clean. Quinn agrees with him.

Liddy informs Quinn about Lumen Pierce residing in Dexter's old house, and he demands more money to continue his investigation. Reluctantly, Quinn gives up another $500 in cash.

Liddy fakes a car accident as a means to gain Lumen Pierce's identity. He takes note of the rolls of plastic sheeting and box of trash bags inside her car.

The next morning, Liddy unexpectedly shows up at Quinn's apartment while Debra is there. An annoyed Quinn tells him to call first next time. After Debra leaves, Liddy briefs Quinn on what he has learned about Lumen (noting the stupidity of her name). Liddy becomes even more interested in the case, but Quinn's feelings for Debra are causing him to have second thoughts. Threatening to tell Debra what Quinn has been up to, Liddy tries to extort even more cash from Quinn.

As Dexter and Lumen dump the remains of Cole from the Slice of Life, Liddy is revealed to have followed them. Using a telescopic lens, he takes several pictures of them throwing black trash bags overboard.

Liddy calls Quinn about the photos of Dexter and Lumen, but he isn't interested in seeing them. When Quinn comes home one night, he finds Quinn in his apartment, drinking alcohol and eating fried chicken. Quinn orders him to "get the fuck out." Liddy then gives Quinn a file containing the photos, speculating that the bags contain drugs or a body, which Quinn finds hard to believe.

Giving Liddy the last of his cash, Quinn tells him to back off, aware that hiring Liddy was a betrayal to Debra. However, Liddy refuses, believing what he stumbled on could revive his career. Liddy threatens to meet with Debra to talk about her brother. Enraged, Quinn pins Liddy to the door and demands that he stay away from Debra and himself. Unafraid, Liddy laughs at Quinn’s attempt to scare him and walks away.

Liddy continues to keep his eye on Dexter and Lumen. Dexter catches Liddy searching Quinn's desk (supposedly for a pen) and they have a brief conversation. After Dexter walks away, Liddy forges Quinn’s signature for police surveillance equipment. He sets it up in Dexter's apartment and begins to watch Lumen and Dexter from his van parked nearby.

Eventually, Dexter notices that they were being watched (via his baby monitor picking up the signal). He discovers that the wireless camera is the property of Miami Metro Police Department. He records the serial number on the equipment in order to learn who checked it out.

During this time, Liddy tells Quinn that he was finally canned by the police department and intends to use a bust on Dexter to get him back in the force, but he needs Quinn's help to arrest him. Quinn, however, wants no part of it. Quinn's attitude doesn't phase Liddy in the slightest and he warns Quinn to be ready when he needs him.

Dexter juggles his ordeals with Jordan and Quinn, choosing to deal with Quinn first as it appears that Quinn was the one who had checked out the surveillance equipment. After seeing a man whom he thinks is Quinn enter a surveillance van, Dexter readies to inject him with M99. However, Liddy is waiting and tases Dexter. He throws Dexter into his van and drives off to the Bayfront Park docks where he intends to have Quinn make the bust for him. After overhearing a phone conversation, Dexter learns that Quinn no longer supports Liddy's investigation. Liddy brings out his laptop and shows Dexter the digital footage he captured, but admits that he did not have the legal right to obtain any of it, so it can't be used in court. Liddy then offers Dexter a deal: if Dexter gives him a full confession, Liddy promises to leave Lumen out of it.

Liddy stands up and begins to videotape Dexter's confession, when he is suddenly kicked in the face and sent flying towards the front seat of the van. Despite having his hands and feet bound, Dexter manages to struggle with Liddy, who pulls a knife to tries and kill Dexter with it. Dexter, however, is able to turn the blade enough to force it slowly into Liddy's chest. Liddy resists at first but, as the knife sinks in deeper, his eyes widen and he is unable to struggle any longer. He dies quickly.

Quinn arrives on scene just as Liddy takes his last breath and checks the van (which is locked in the front, then on the side doors by Dexter himself). Quinn even tries calling Liddy's phone but Dexter cancels out the call so that Quinn can't hear it ring. Quinn gets frustrated and gives up but, before he walks away, a drop of Liddy's blood leaks out of the van and lands on his shoe, although Quinn fails to notice. After Quinn drives away, Dexter emerges from the van. He does not have time to deal with Liddy's body, but does take the time to remove the tape from Liddy's camera and destroy his laptop by tossing it into the bay.

The police find Liddy's body, and Quinn is considered a suspect, due to Liddy frequently calling him and the blood on his shoe. Quinn refuses to say what the nature of their relationship was, likely to protect Debra. Realizing how much Quinn means to Debra, Dexter sabotages the blood test, making it appear that it was not Liddy's blood on Quinn's shoe, clearing him. Quinn later thanks Dexter for this, although Dexter pretends to not know what Quinn is talking about. 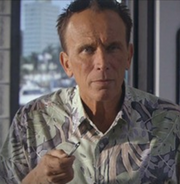 Liddy takes photos of Dexter and Lumen on boat

Liddy spies on Dexter and Lumen

Liddy's body
Add a photo to this gallery
Retrieved from "https://dexter.fandom.com/wiki/Stan_Liddy?oldid=106218"
Community content is available under CC-BY-SA unless otherwise noted.