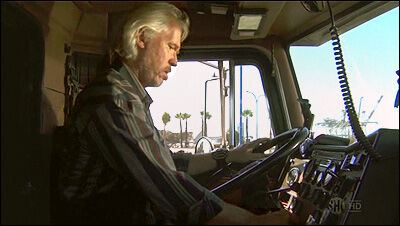 Neck sawed through (inside his truck)

Stan Beaudry is a character in Season Four of Showtime’s series DEXTER.

He was a long-haul truck driver based in Miami, who was one of Frank Lundy's Trinity Killer suspects.

In 2007, Stan Beaudry bludgeoned a prostitute to death with a crowbar and dumped her body along a highway. Unfortunately, the crowbar was contaminated during chain of custody. As a result, the entire case against Beaudry was dropped, and he ended up walking free with no conviction for his crime of murder.

After Trinity’s DNA is found at a crime scene, it proves that he is related to Christine Hill, and she is brought in for questioning. Dexter Morgan watches on a monitor as Angel Batista pressures Christine to give up the name of her father (Arthur Mitchell), but she feigns ignorance of his identity. A warrant is issued for Christine’s apartment, where Angel and Debra Morgan find a box of postcards signed, “Love, Daddy,” under her bed. All are from the cities of Trinity’s victims.

The police are closing in on Arthur and Dexter needs to buy himself time to kill him. He decides to frame someone as Trinity to throw off the police. He goes through Frank Lundy’s Trinity files and chooses Stan Beaudry as the most convincing suspect since, as a trucker, he travels throughout the U.S. When Dexter arrives at Beautry’s address, he finds that he lives off the grid in a shack. Beaudry is not there, but Dexter hears voices on a CB radio, and notices from a calendar that he is returning the next day from a trip to Jacksonville.

To collect Arthur Mitchell’s DNA, Dexter breaks into his house and steals a few of his personal items (e.g., hairbrush, comb). Then Dexter drives north on I-95, looking for Beaudry. Using the handle “Little Chopper,” he talks on the CB radio, pretending to be a truck driver. He asks for the location of “Stan the Man” (Beaudry’s handle). Someone answers, saying that Beaudry is at Freddy’s Truck Stop, off the 91 exit.

Dexter drives to the truck stop and hides in the back of Beudry’s truck. The moment that Beaudry sits down, Dexter strangles him until he is unconscious. Dexter sets up a small makeshift kill room in the back of Beaudy's own truck to speed the process along. Although in a hurry, Dexter collects a blood slide, at a quicker pace than usual. Beaudry, restrained and facing his own death, is enraged. He threatens Dexter up until the moment that Dexter cuts his throat with a reciprocating saw. Dexter dismembers Beaudry’s body and loads the bags holding the remains into his car. He then plants evidence inside the truck - Lundy's Trinity files, a picture of Christine Hill, and hair strands from Arthur Mitchell’s brush.

Dexter returns to Beaudry’s house and sets out items with Trinity's DNA -- razor, comb, and toothbrush. Inside a tool chest, he places the hammer used by Trinity to bludgeon Earl Doorman. Later, the police scour Beaudry’s place and discover the fake evidence that Dexter planted. Beaudry is now the prime suspect in the Trinity Case.

Arthur follows Dexter to the Miami Metro Police Department and steals a visitor’s badge. As he walks through the station, he notices Dexter in a photo of Homicide’s bowling team. Arthur then takes an elevator to the Homicide department. He almost immediately sees a room displaying evidence in the Trinity Case, including two large boards with photos of his victims. As he looks them over, he smiles. On the side of one board, he notices photos of Stan Beaudry with captions saying that he is the suspect. Arthur smiles again and remarks, “Why, Mr. Beaudry, you’ve done me a kindness.” He returns to his search for Dexter, and they meet face-to-face.

Beaudry's calendar with date of his return to Miami

Beaudry's heads back to his truck

Beaudry on kill table in the truck

Past and present photos