Slice of Life is an object and location in the Showtime series DEXTER.

It is Dexter Morgan's fishing boat, which he primarily uses to dump his victims into the Atlantic Ocean, off the coast of Miami.

An important change that happened before the beginning of the series was the manner in which Dexter disposed of his victims.

According to Early Cuts, Dexter bought a fishing boat in 1993. Up to this point, he had buried his victims, left them in the Everglades, or burned the bodies. Looking for a better way, Dexter purchased the boat from Dr. Greenstein (Gene Marshall's psychiatrist), renaming it from Slice of Heaven to Slice of Life. The name is a pun. "Slice" refers to Dexter's use of blades.

With the boat in his possession, Dexter began to discard his victims at sea. Dismembered body parts were put into heavy duty trash bags, weighted with rocks from near his dock, and dumped into an Underwater Graveyard (later, the Gulf Stream). Dexter’s original marina, Coral Cove, was the same one where Harry had a slip for the family boat.

Dexter is almost revealed as The Bay Harbor Butcher when he wipes his boat clean in front of recently installed security cameras. But, before the footage is seen, he's able to hastily delete the files from Lundy's computer ("Dex, Lies and Videotape").

Later, he faces a worse crisis when Sergeant James Doakes attaches a GPS Tracking Device onto his boat and follows him to a kill site, where he confronts Dexter and discovers his secret ("Resistance is Futile"). It doesn't end well for Doakes, though, when Dexter captures him and keeps him locked in a cage.

Dexter also uses the boat to help himself connect with others, such as successfully getting back on Rita's good terms by taking her and the kids on a fishing trip ("Left Turn Ahead").

Maria LaGuerta discovers a discarded blood slide in the scorched church where Travis Marshall was killed, and compares it to the slides taken by The Bay Harbor Butcher. She similarities between the two, and determines to clear James Doakes' name as the Butcher.

In "Buck the System," Louis Greene makes an attempt to sink the Slice of Life. However, Isaak Sirko confronts Louis and shoots him in the head, with Louis dying on Dexter's boat. George is then ordered by Isaak to clean up the mess and get rid of Louis' body. When Dexter discovers blood on his boat while cleaning it, he tests it and surmises that Louis is dead.

In "Argentina," Maria LaGuerta makes inquiries at the Coral Cove Marina when she notices Dexter's name on a list of boat owners that have used the marina - the same one as The Butcher. The dock master informs her that Dexter Morgan used to rent a slip there but he moved his boat in May 2007, even though he had eight months left on his lease. Soon, Dexter becomes her prime suspect.

In "Surprise, Motherfucker!," LaGuerta suspects that Dexter committed another murder and she arrests him. However, Dexter had previously planted evidence on his boat to make it look as if she's framing him, so he is quickly released.

Dexter uses the boat to dispose of A.J. Yates' body, while bonding with Debra and Evelyn Vogel.

Fate of Slice of Life

When Dexter and Hannah McKay decide to move to Argentina, Dexter makes an unsuccessful attempt to sell his boat. However, due to some delays (e.g. going after Oliver Saxon), Dexter ends up using the boat one last time to bury his sister at sea after he turns off her life support.

Upon realizing that he needs to live a distant life in order to protect those that he cares about, Dexter drives the Slice of Life toward Hurricane Laura. The boat is obliterated and, after the storm clears out, its wreckage is found about a mile offshore, with no apparent survivors. ("Remember the Monsters?")

In reality, Dexter used its emergency life raft[1] to escape death from the hurricane, after which he moves to a remote, undisclosed location. (See: Dexter's Rented Room)

Was it always Dexter’s plan to survive after he sailed into the hurricane?

He knows exactly what he’s doing there; he’s putting his boat in the path of the hurricane, which will then allow him to escape in this way. It is mentioned in an earlier episode that he does have an emergency life raft aboard that boat and you can look back and see he had a plan, he just didn’t know what it was. - [2]

According to Dexter in "Love American Style", the boat is a 32-foot concept. [3]

Dexter reveals a lot of information about the boat in "Monkey in a Box" when attempting to sell it off to a potential boat buyer:

"She's a 2001 Century 2901 center console. I had this custom rail put in. New paint. Has a radar, GPS, fish-finder, autopilot, emergency life raft. And I had these twin Yamaha 250 four stroke motors put in. They got just over 400 hours, and when you open them up and you're out there...There's nothing like it." [4]

Note: The year of the boat conflicts with Early Cuts, when he supposedly bought it in 1993.

In season 1, episode 1 the Slice of Life has twin Evinrude 250 HP outboard motors. Later in the series, the boat is equipped with twin Yamaha 250 HP outboards. Dexter also advertises the boat as having Yamaha motors when he is selling it in season 8 (he indicates that he may have upgraded them at some point). The actual boat, which was auctioned on ebay.com sometime after the original series ended, was equipped with the Yamaha motors.

Navigating in the Slice of Life, Dexter disposes of Mike Donovan's body into the ocean.

Still from Season One

Dexter on Slice of Life

Dexter and Miguel on a fishing trip

Debra is buried at sea

Miguel guts a fish on Slice of Life

Dexter and Lumen on Slice of Life

Dexter on Slice of Life 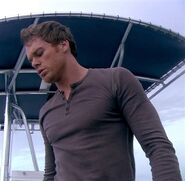 Dexter dumps the bodies of Valerie and Jorge Castillo

BHB 18, victims disposed of from Slice of Life into Underwater Graveyard

Clint McKay is killed on Slice of Life

Wreckage of Slice of Life

Miguel suspects that Dexter is going on a kill

Hannah explains her fear of water

Hannah reads that Dexter died and his boat was destroyed