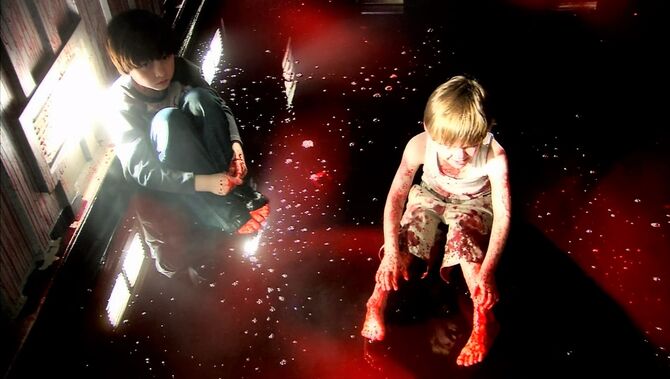 The Shipping Yard Massacre is a major event on Showtime's series DEXTER.

It was a drug-related quadruple murder committed in Miami inside a shipping container.

On 2 October 1973, four people were brutally murdered inside a cargo container under the orders of Hector Estrada, a drug kingpin. One of the victims was Laura Moser, a confidential informant for Harry Morgan. Her two young sons - Dexter and Brian Moser - were present during the crime and witnessed their mother and the others being butchered with a chainsaw. The boys were then left behind to sit in blood for two days (early Tuesday through most of Wednesday) before they were found by police.

Harry Morgan was called to the scene. He rescued (and adopted) Dexter, thus separating the brothers. Brian grew up in a Tampa Bay mental institution. Over time, he noticed that something was off about Dexter. When Harry found a grave of animal bones, he confronted young Dexter, and Dexter admitted that he did kill the animals. As a homicide detective, Harry realized that Dexter would likely victimize humans later on in life. To help Dexter avoid prison, Harry taught him a code to live by that would protect him. Under the code, Dexter was allowed to murder deserving individuals, while knowing how to avoid suspicion by law enforcement.

The trauma of The Shipping Yard Massacre contributed to both Dexter and Brian becoming serial killers -- Dexter as The Bay Harbor Butcher, and Brian as The Ice Truck Killer.

In looking for Debra after she was kidnapped, Dexter reads an online article about the Shipping Yard Massacre. Brian later tells him what happened that day.

Dexter requests the Miami Metro file for the Shipping Yard Massacre from Francis. He reads that four bodies were “found on Wednesday” by Port Authority -- two women, two men. Francis also gives him audiotapes of Harry talking with his confidential informant.

In the first tape, Harry records its date as “Friday, September 28, 1973.” To Dexter’s surprise, he is speaking to Laura Moser, his bio mom. She’s terrified of continuing to help with the drug sting, but Harry insists they need to catch Estrada and his men in the act.

In the next tape, Laura informs Harry that a shipment of 300 bricks of cocaine is coming in the next day. He promises to protect her and her sons.

During an online search, Debra discovers that Brian and Dexter are brothers.

The massacre was reported in an article dated October 3, 1973. Brian Moser hoped to jog his brother's memory regarding the event. To do this, he left the number 103 as significant clues at the Marina View Hotel:

Add a photo to this gallery
Retrieved from "https://dexter.fandom.com/wiki/Shipping_Yard_Massacre?oldid=117561"
Community content is available under CC-BY-SA unless otherwise noted.