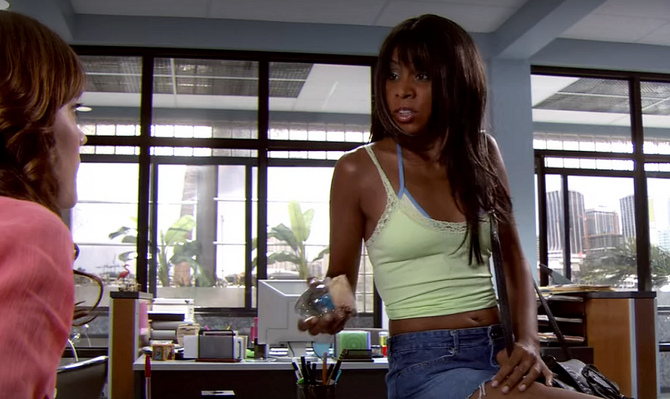 Shanda is a character in Season One of the Showtime series DEXTER.

She is a prostitute who knew Debra Morgan as "Brandy" (when she worked undercover as a hooker).

When Cherry, one of the working girls, ends up as a victim of The Ice Truck Killer, Debra visits Shanda as well as Bella, Gabrielle, and Bridget, all prostitutes. (Bridget immediately flees when she learns that Deb is a cop).

Despite the truth about Debra being a cop, Shanda is still convinced that she is a prostitute in one way or another. Debra warns Shanda to stay safe, but she refuses to leave town, even with the Ice Truck Killer on the loose.

Shanda visits Debra at the Miami Metro Police Department, hoping to score a favor in dealing with her landlord. Debra, somewhat annoyed, brushes it off.

Later, with the recovery of Tony Tucci, Debra decides to do something nice for him. She brings Shanda to the hospital and watches the door while she has sex with Tony (which he thoroughly enjoys).

When Tony is finally ready to be released from the hospital, Shanda is with him at the party that's held for him. Afterward, Shanda does not appear again.

Deb talks with Shanda and other hookers

Shanda tells Doakes to "calm the hell" down after he chastises Debra for smoking at a crime scene
Community content is available under CC-BY-SA unless otherwise noted.
Advertisement