The fourth season of the Showtime series DEXTER premiered 27 September 2009. The season opener was leaked to the Internet ahead of schedule in late August 2009.

Dexter as a father and husband struggles to figure out how to survive for years to come. He seeks to learn from Arthur Mitchell, a serial killer and family man, who has murdered for over thirty years without being discovered. However, this proves to be a grievous mistake and his wife is murdered.

The fourth season received positive reviews before airing, including one from Michael Ausiello of Entertainment Weekly, who saw the fourth season as being "bloody promising." The New Yorker's Emily Nussbaum called John Lithgow's characterization of Arthur Mitchell as "so creepy I’m still not over it."

Six months after the Season Three finale, Dexter is now living with three kids and a wife in a new home. Along with his new son Harrison, the complexities of being a suburban father of three is making it difficult for Dexter to concentrate on his work. Dexter's lack of sleep results in a murderer being released because Dexter brought the wrong case file to court. A recently retired Agent Frank Lundy has returned to finally capture a shadowy serial killer known as the "Trinity Killer" who has been at large for thirty years and always kills three people in each cycle. After a call from Rita, Dexter quickly kills the released murderer but totals his car after falling asleep at the wheel.

Suffering from amnesia following his car crash, Dexter begins searching for Benny Gomez's lost body. Debra struggles with the return of her former lover while Quinn tries to juggle his personal and work life. Meanwhile, the Trinity Killer begins stalking his next chosen victim.

When a local vandal begins stirring up trouble, Dexter's neighborhood becomes vigilant and wary, two things Dexter doesn't need. His mobility is also hampered by Rita, who insists on driving him around after his accident. Debra isn't pleased when Anton announces he's taken a local job to spend more time with her. Meanwhile, the Trinity Killer dispatches his next victim. Debra becomes drawn to Lundy's research into Trinity, while Dexter finds himself in awe of Trinity's masterful killing technique. Despite their enthusiasm, LaGuerta threatens to shut down the investigation, instead focused on bringing the Vacation Murderers to justice.

While Rita and the kids are out of town for a wedding, a police officer comes onto Dexter's radar. The officer is highly suspicious of Dexter's motives. LaGuerta and Angel discuss full disclosure to the police department leadership, pulling Dexter unwillingly into the middle of their problem. Meanwhile, Quinn's reporter girlfriend, Christine Hill uses their relationship to put out a story how Lundy's hunt for a phantom killer pulls time away from the Vacation Murders. This puts a strain on Lundy's retirement project when his visitor's pass to Miami Metro is revoked. Having to take the project out of the office, old sparks heat up between Lundy and Debra.

Recent events spur Dexter into his own investigation of the Trinity Killer. His motivations are now personal, and the clock is ticking. But the closer Dexter gets, the more he realizes that Trinity is unlike any monster he's previously encountered. Meanwhile, Debra blames herself for events that were out of her control, and pushes away those closest to her. As LaGuerta and Batista close in on the Vacation Murderers, Batista realizes he can use Quinn's relationship with a certain reporter to his advantage. And when Rita discovers a secret that Dexter's been keeping from her, she begins to realize just how little she knows about the man she married.

Dexter knows it's only a matter of time before Miami Metro discovers the Trinity Killer's latest handiwork. Therefore, he has to work even harder to stay one step ahead of their investigation. Under the alias of 'Kyle Butler,' Dexter has begun to realize that the closer he gets to Trinity, the more he stands to learn from him. As the friendly building contractor Arthur Mitchell, the Trinity Killer hides behind a well-kept mask; and getting behind that facade will require some extra effort on Dexter's part. Meanwhile, Debra becomes frustrated when she finds herself shut out from her own case. She considers bending the rules in the name of justice, risking her career in the process. LaGuerta and Batista come to regret a major decision, and realize that by playing by the rules they may have painted themselves into a corner. When the friction between Rita and Dexter comes to a head, Dexter gleans relationship advice from a most unlikely source.

A dismembered human arm is found inside an alligator, leading Dexter to his next victim, Jonathan Farrow, a photographer, who shoots gruesome pictures of models. Family and work taking its toll, a hurried Dexter accidentally makes his greatest single mistake and violates the Code of Harry. Meanwhile, Arthur Mitchell appears to be disturbed, and is unable to put a doe out of its misery after hitting it with his car. He then proceeds to build a coffin with lumber he obtained with Dexter's help. In order to get more 'alone time', Dexter, acting upon Arthur's advice, attempts to involve his kids in more activities, only to get pulled into the activities with them. After threatening Quinn to keep his girlfriend reporter away from Deb, Quinn starts digging into Dexter's past and makes his life a lot more difficult.

Dexter has always known his father's Code was meant to protect him from exposure. But after committing a serious mistake, he wonders if it could have been designed to protect him from something even more dangerous - human emotion. When he discovers that Arthur is planning an out-of-town trip, Dexter sees an opportunity to ride along and gain insight into the mind of a fellow monster. Even so, Dexter isn't prepared for the startling revelations Arthur makes along the way, revelations about his own past which only serve to convince Dexter of what he must do. Meanwhile, back at Miami Metro, Debra refuses to let a technicality keep her off the Trinity Case. She works through others to ensure her voice is heard - that is, until she realizes that her single-minded pursuit of the Trinity Killer may have blinded her to the truth.

For most people, Thanksgiving is a time for traditions and family. But for Dexter, it's an opportunity to get closer to his most dangerous adversary yet. As Dexter gains insight into Arthur's psychology by studying those closest to him, he finds himself drawn into a bizarre and twisted world. Meanwhile, Rita has her hands full preparing dinner for a packed house, including a few unexpected guests. Batista gets closure on an old case, while Debra uses the holiday to continue her investigation of the Trinity Killer, a pursuit which threatens her brother's safety and brings to light surprising revelations about someone close to her.

Dexter finally believes he understands the beast Arthur Mitchell, known as the Trinity Killer. But when a ten-year-old boy goes missing, Dexter is forced to question everything he's learned up to this point. It's a race against the clock to find the boy before Trinity kills him. Cody is forced to defend one of Dexter's lies, and Masuka tries to confess what he witnessed at Thanksgiving.

Dexter's worst fears have been realized. Because of Debra's unrelenting pursuit, Miami Metro is just one step away from discovering the identity of the Trinity Killer. Dexter can't let that happen. Arthur's arrest would not only deprive Dexter of a satisfying kill, it would also expose the secret life Dexter's been leading (as Kyle Butler). Dexter must take drastic action to buy himself time to deal with Trinity in his own fashion. Meanwhile, Rita decides to confide in Dexter, which doesn't go as well as she'd hoped. LaGuerta and Batista's breach of ethics paints them into a very tight corner. Arthur, who still can't understand why Dexter didn't simply turn him in, begins his own investigation into 'Kyle Butler.'

As the noose tightens, Arthur warns Dexter to back off. But Dexter will do anything to stop Arthur from eluding him, even if that means putting himself on the wrong side of the law. Rita acknowledges the rocky relationship she and Dexter share, but reaffirms her support. Meanwhile, Batista and LaGuerta face the consequences of their actions and now that they are married, agree to move in together. Debra finally learns that Dexter is the Ice-Truck Killer's brother and tells Dexter. She then tells him he is the only constant truly good thing in her life and that she loves him. Dexter finally captures and kills Arthur, but then goes home to find Rita dead.. killed by Arthur hours earlier in the same manner as the other Trinity bathtub victims, and Harrison, alive, sitting in a pool of Rita's blood. 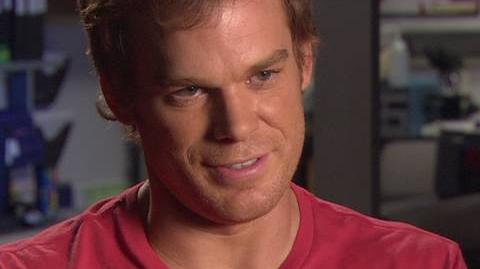 Dexter falls asleep at the wheel and rolls his car

Zoey Kruger warns Dexter to back off her case

Dexter as he prepares to kill Zoey

Dexter is tempted to kill Arthur

Dexter kills Arthur with a hammer