Season Eight (also known as DEXTER: The Final Season) was the last season of the Showtime series DEXTER. However, on 14 October 2020, a Revival was announced and Dexter: New Blood will air in 2021.

Season Eight premiered on 30 June 2013, while all previous seasons premiered in September or October. It consists of twelve episodes, the same as the past seasons. The DVD and Blu-ray disc release date for Region 1 was scheduled for 12 November 2013.

In this season, Dexter discovers more about his childhood and the origin of the Code of Harry. He also deals with several serial killers and later commits a mercy kill. It ends with Dexter departing Miami to live in the Pacific Northwest.

Six months after killing LaGuerta, a shattered and guilt-ridden Debra has quit her job at Miami Metro and joined a private investigation company, run by Jacob Elway. In her absence, Batista has returned from retirement and become Lieutenant. Miami Metro investigates a new serial killer, the "Brain Surgeon," who takes melon ball size scoops of brain tissue from his victims. The MMPD receives help from psychopath expert Evelyn Vogel, who also appears to have a keen interest in Dexter. Deb abuses prescription Rx and even cocaine while working undercover to bring in Andrew Briggs, who has stolen jewels from the mob. Dexter warns Debra that Briggs is being targeted by El Sapo, a mob hitman, but inadvertently kills Briggs himself. Quinn and Jamie have begun a relationship, which Quinn wants to keep secret from Batista. Vogel confronts Dexter with murderous drawings from his childhood, and reveals that she knows about Harry's Code.

Vogel reveals to Dexter that she helped Harry create his Code, harboring a perverse interest and admiration for psychopaths. She asks Dexter to track down the Brain Surgeon, whom she believes to be one of her former patients and a grave hazard to her life. While tracking down the stolen jewels, Debra is beaten by El Sapo, but later murders him. Dexter finds traces of her blood at the crime scene, but hides it from the police. Quinn and Jamie argue over Quinn's future and Batista's involvement in their relationship. Dexter tracks down one of Vogel's patients, Lyle Sussman, who he believes is the Brain Surgeon, but discovers he has been murdered. Vogel and Dexter find a DVD from the Brain Surgeon, showing the killer forcing Sussman at gunpoint to do his bidding. Dexter agrees to track down the killer from Vogel's list of suspects.

With Sussman's body arranged to look like a suicide, Miami Metro closes the Brain Surgeon Case; however, the real Brain Surgeon leaves disturbing trophies on Vogel's doorstep. Dexter pursues another of Vogel's former patients, Ron Galuzzo. Debra spirals out of control and, despite Dexter's attempts to reconcile their relationship, tries to confess to killing LaGuerta; Dexter arrives and stops her, leaving her with Vogel for psychiatric treatment. Quinn's preoccupation with Debra causes friction between himself and Jamie, and Batista begins to lose faith in Quinn's ability to pass the Sergeant's exam. Vogel admits that she finds Dexter's love for Debra unusual and questions why Dexter didn't kill her when she discovered his secret, implying that he is not a "perfect" psychopath. Dexter learns that Galuzzo is a cannibal, and kills him.

Dexter searches for the next potential killer on Vogel's list, A.J. Yates. He finds evidence that Yates is the Brain Surgeon and tries to kill him, but Yates escapes. Dexter finds out that Vogel is keeping notes on her interaction with him. Miami Metro investigates the murder of one Norma Rivera. Quinn passes the Sergeant exam, and Batista presses him to solve the Rivera case if he wants the promotion. Masuka has an awkward encounter with Niki Walters, a 20-year-old, who claims to be his biological daughter via artificial insemination. Vogel begins Debra's treatment, taking her to the shipping container where she killed LaGuerta. Dexter meets his new neighbor, Cassie Jollenston, whom Jamie wants him to date. Upon learning that Harry committed suicide because of Dexter, Debra tries to kill them both, driving off the road into a lake, then pulling Dexter out.

Vogel tries to reconcile Dexter and Debra's differences in therapy, but Dexter walks out. Miami Metro PD steps up its investigation of Norma Rivera's murder. They target her millionaire boss, Ed Hamilton, with whom she was having an affair, but Matthews pressures Quinn to overlook Hamilton. Dexter suspects Hamilton's son, Zach, is the real killer. Masuka asks Debra to do a background check on Niki, who claims to be his daughter. Yates abducts Vogel; Dexter and Debra reconcile as they work together to find her. Vogel manages to call Dexter, and Deb has Elway trace the location. Dexter kills Yates, and brings Debra and Vogel along as he dumps the body, explaining that he considers them family, seeing Vogel as a mother figure.

Dexter investigates Zach and confirms that he murdered Norma. Vogel wants to teach Harry's Code to Zach, but Dexter is skeptical. Deb helps her boss, Elway, prove his sister's boyfriend is being unfaithful. After being denied the Sergeant's position, Quinn zealously investigates Zach. Dexter captures Zach, who only killed Norma to protect his mother's fragile mental state from his father's marital indiscretions; Zach's motives convince Dexter to teach the Code to Zach Later, while at Debra's Beach House, Deb and Dexter are drugged by Hannah McKay.

Waking up unharmed, Dexter and Debra believe that Hannah has sent them a message. Dexter finds Hannah's current alias and address, and learns that she is married to multimillionaire Miles Castner. Masuka learns that Niki works at a topless sports bar, so he secures her a part-time job in his lab. Zach visits the precinct with his lawyer and demands that Quinn stop following him. Quinn and Jamie decide to move in together. Hannah confesses to Dexter that she hoped he would kill Miles. Debra borrows Elway's GPS and tracks Dexter. Miles violently confronts Hannah about her meeting with Dexter, and she kills him herself. Dexter and Hannah dump the body, but Debra sees them together. Dexter is called to a crime scene in his building. Cassie has been bludgeoned, in the same fashion as Norma, and Dexter suspects Zach.

Dexter finds evidence that Zach killed Cassie. He tracks Zach to a hotel in the Florida Keys, and Hannah accompanies him. During the trip, Dexter plans to get Hannah a new identity so she can flee the country. Debra uses the GPS to follow Dexter to the motel. Dexter and Hannah realize that Zach was in the Keys at the time of Cassie's death, which means that someone is trying to frame Zach. Debra tries to arrest Hannah, but stops when Hannah convinces her that she loves Dexter. However, Elway informs the authorities that Hannah may be in Miami. Back in Miami, Dexter, Hannah, and Zach have dinner with Vogel. Afterward, Dexter takes Hannah to her hotel room, where they have sex. At his apartment, Dexter finds Zach's corpse, left by the Brain Surgeon. After dumping the body, Dexter asks Hannah to stay in Miami.

Investigating Zach's murder, Dexter finds DNA evidence and learns that the Brain Surgeon is Vogel's psychopathic son, who faked his own death years ago and changed his identity to that of a dead person, Oliver Saxon. U.S. Marshal Max Clayton arrives in Miami to search for Hannah, but Dexter throws him off the trail and moves Hannah to Debra's Beach House. Deb suspects Saxon of Cassie's murder, but he goes into hiding. Debra later considers rejoining Miami Metro. Dexter lures Saxon from hiding but loses him, after which Vogel implores Dexter to let this case go. Dexter makes plans to leave Miami permanently, taking Hannah and Harrison with him -- but not before finding and killing Saxon. Unbeknownst to Dexter, Saxon has met with Vogel, who accepts him into her home.

Saxon asks Vogel to help him live free, as she helped Dexter. Dexter gives Angel Batista his two weeks notice, and tells Debra he's moving to Argentina with Hannah and Harrison. Clayton learns that Dexter is leaving Miami. Debra returns to Miami Metro and rekindles her relationship with Quinn, who has broken up with Jamie. Despite her desire to help Saxon, Vogel decides to betray him after watching the video of Zach's murder. Due to a treadmill accident, Hannah must take Harrison to the ER, but a nurse recognizes her and puts Clayton on her trail. Vogel brings Saxon to her home, but her nervousness makes him suspicious. When Dexter arrives, Saxon murders Vogel in front of him and escapes.

Dexter removes all of the evidence pointing to his relationship with Vogel before calling the police. Elway and Clayton suspect that Debra is harboring Hannah. Saxon offers Dexter a deal that the two will leave each other alone. Dexter agrees, but secretly plans to kill him before leaving. With a hurricane approaching Miami, Hannah goes to the airport to wait for Dexter, but she is followed by Elway. Meanwhile, Dexter captures Saxon, but realizes that he would rather be with Hannah than complete the kill. Dexter calls Debra to arrest Sazon, but Clayton tails Debra and unknowingly interferes. Saxon kills Clayton and escapes after shooting Debra.

Debra is rushed to the hospital and Quinn goes with her. At the airport, Dexter, Hannah and Harrison manage to elude Elway, but they are forced to leave the airport due to the fake bomb scare that Dexter has rigged. Hannah and Harrison board a bus to the Jacksonville airport, but Elway is waiting for them. Hannah evades Elway and escapes with Harrison. Saxon goes to the hospital with the intention of killing Debra, but Dexter spots him and he is arrested by Angel. After successful surgery, Debra suffers a massive stroke from a blood clot, leaving her brain dead. Later, Dexter meets with Saxon at the jail and provokes him to stab him with a pen. Dexter retaliates and kills him by puncturing his carotid artery with the pen. Angel and Quinn question Dexter about Saxon's killing and, although they suspect what really happened, conclude that Dexter acted in self-defense. Dexter returns to the hospital during the evacuation and takes Debra off life support. He takes her body out to sea and drops it into the water. Dexter then drives his boat toward the hurricane in what appears to be a suicide attempt. A few days later in Buenos Aires, Hannah reads of Dexter's death. However, Dexter is revealed to have faked his death, and is now working (likely under an assumed identity) for a lumber company in the Pacific Northwest.

The victim's brain is cut open with a portion missing

The marking on the back of Yates' head

Dexter impales Yates through the bed he's hiding under

Dexter realizes that The Brain Surgeon is still active

Dexter embraces Debra one last time before leaving for the airport

Saxon strapped to his own kill table

Even on the verge of death, Saxon sports a grin 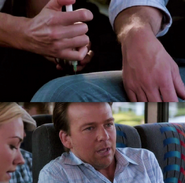 Debra, just before being dumped in the harbor by Dexter

Dexter pilots his boat out into the storm, disappearing from Miami forever

The final shot of Dexter 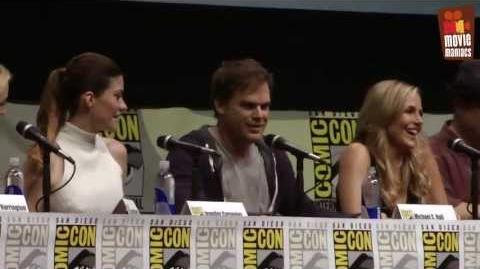 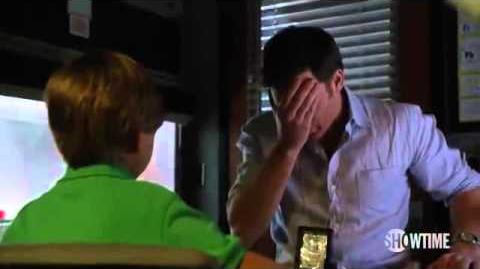 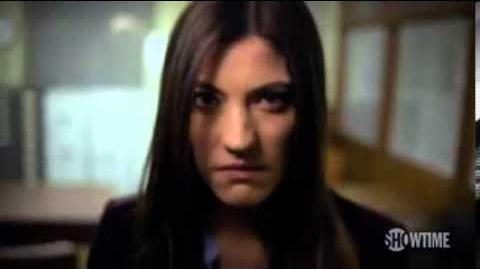 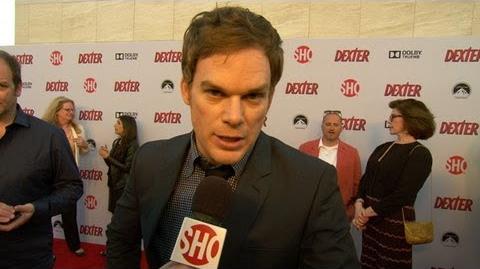