In 2013, he played Jacob Elway, owner of Elway Investigations in the Showtime series DEXTER.

He is known for playing roles such as Connor MacManus in The Boondock Saints, Greg Stillson in The Dead Zone, Jeremy "Powder" Reed in Powder, Indiana Jones in The Young Indiana Jones Chronicles, and Bobby Dagen in Saw 3D. Flanery also held the role of Sam Gibson on The Young and the Restless in 2011. He starred in Devil's Carnival, a short film which was screened on tour beginning in April, 2012.

Flanery was born in Lake Charles, Louisiana, and was raised in Houston, Texas. His ancestry includes Irish, Cajun (French), and English. After attending Awty International School, Flanery graduated from Dulles High School in Sugar Land, and attended the University of St. Thomas in Houston.

He is married to Playboy model and actress Lauren Michelle Hill and has two sons. He has a daughter from a previous relationship.

Flanery won the 1997 Toyota Pro-Celebrity Race at the Toyota Grand Prix of Long Beach as the celebrity driver, and he won the 1998 race as a professional driver. Flanery is also a black belt in Brazilian Jiu-Jitsu, which he teaches. 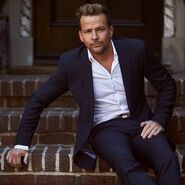