He made an appearance in the show The Book of Daniel, in an episode that was only aired online.

He was born in New York City, New York. He grew up on Long Island and Scottsdale, Arizona. He attended Brophy College Preparatory, a Jesuit school in Phoenix, Arizona. He then attended Northwestern University in Chicago. He is married to Brooklyn born and raised Jennifer Logan Winters, with whom he has two daughters. He is brother to actor Dean Winters and Writer/Producer Brad Winters. His sister Blair is married to Writer/Producer Jorge Zamacona.[1] He lives in a cabin three and a half hours away from Los Angeles.[2] 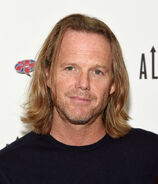 Retrieved from "https://dexter.fandom.com/wiki/Scott_William_Winters?oldid=75047"
Community content is available under CC-BY-SA unless otherwise noted.