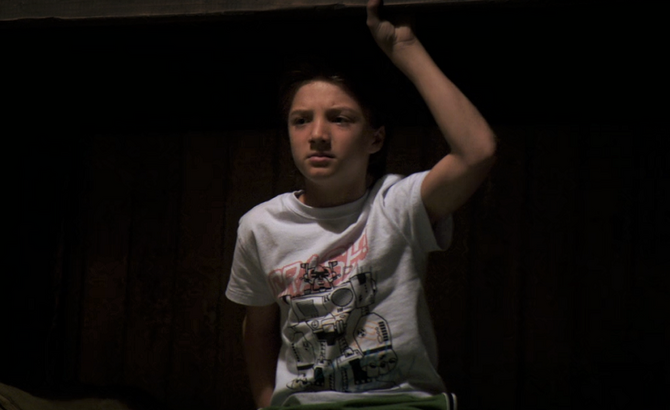 Scott Smith is a child character in Season Four of the Showtime series DEXTER.

He is an attempted murder victim of Arthur Mitchell aka The Trinity Killer.

Arthur approaches Scott in an arcade and pretends to be a police officer, saying his parents were in an accident. He leads Scott to his van in the parking garage, where he sedates and captures him. Arthur takes Scott to an underground bomb shelter, where he has a record player and a toy train set. He begins to call Scott by the name "Arthur" and pressures him to put on a pair of pajamas.

At first, Scott fears Arthur and resists following his instructions. He finally puts on the pajamas so that Arthur will give him food. Later, Scott starts to feel sympathy for Arthur after he cries and tells him the story of his sister, Vera Mitchell. To make Arthur happy, Scott agrees to be called "Arthur."

After Scott promises to stay "innocent," Arthur states that it's time to set him free, and gives Scott (drugged) ice cream to eat. When Scott passes out, Arthur takes him to a Four Walls One Heart construction site, and begins to bury him alive encased in cement. At that moment, Dexter Morgan arrives and struggles with Arthur. He is able to save Scott, but Arthur escapes.

Arthur watches a newscast showing Scott alive and reunited with his family. "Interesting," he says.

Scott is interviewed by Debra Morgan, and he recalls exactly how Arthur kidnapped and drugged him. He also remember a vital clue -- the logo for Four Walls One Heart.

Arthur pretends to be a cop

Arthur tells Scott his parents were in an accident

Arthur takes Scott to his van

Arthur and Scott in bomb shelter