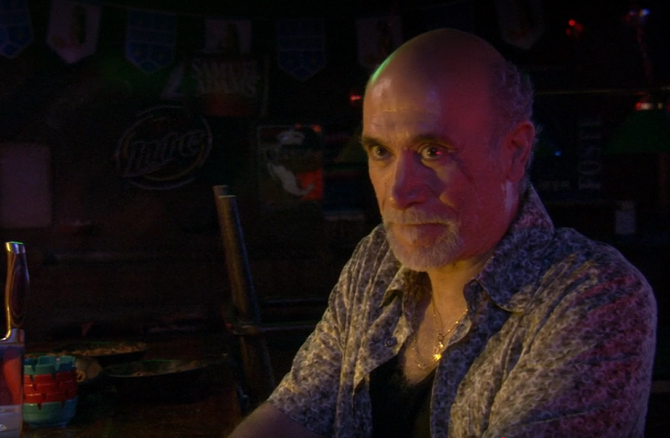 Dismembered with a chainsaw

Ordered by Hector Estrada to perform the kills
Santos Jimenez is a character in the Showtime series DEXTER.

He was a notorious drug dealer who operated under orders from Hector Estrada, who had many connections throughout Miami. This drug organization became the prime target of Detective Harry Morgan prior to the series.

Jimenez was directly responsible for the murder of Laura Moser (Dexter Morgan's bio mother) after Estrada gave the order to kill her and three others.

During his early years as a drug dealer, Jimenez worked for a local drug lord named Hector Estrada. Jimenez followed Laura Moser on suspicion that she was a snitch and this was confirmed when she was caught meeting Detective Harry Morgan, with whom she was having an affair.

Estrada ordered Jimenez to kill Laura, plus three junkies. Jimenez used a chainsaw inside a shipping container to murder them in a very brutal manner. Laura’s two young boys were left to sit in the blood for two days before being discovered by police. This became known as the Shipping Yard Massacre.

Afterward, Jimenez cut a deal with police and was included in the Witness Protection Program. One of the other killers was imprisoned and one died. Years later, Jimenez ran a tavern called The Swamp in Naples, Florida, while he continued to sell cocaine.

During a NA meeting, Dexter falls asleep and has a dream that he is The Dark Defender. When Lila West asks what he was dreaming about, he tells her about his mother’s murder. Lila feels that he needs to confront his past.

Dexter obtains Santos Jimenez’s file from Francis, a records clerk. He learns that the case is still open because Jimenez had turned state’s evidence. Now Jimenez lives in Naples, FL, running a tavern, and probably thinks that after 34 years no one wants him dead. Francis says there is an audio tape of the informant in the case. When Dexter listens to the tape (dated Friday, Sept 28, 1973), he is surprised that the informant is his mother. Harry is pressuring her to find out when the next shipment of drugs is expected so that Estrada and his men can be arrested. Laura expresses her fear of being killed by them, but Harry reassures her that he won’t let anything happen to her or her boys.

Lila drops by Dexter’s lab unexpectedly and directs him to focus his rage on the person who hurt him. She suggests driving the two hours to Naples that night to face Jimenez and Dexter agrees to pick her up after work. On the way, Lila persuades Dexter to practice what he will say to Jimenez. Dexter slowly opens up, saying, “I feel like...you stole my life. I’m not the person I’m supposed to be. It’s like I’m hollow. I hide in plain sight...unable to reach out to people...close to me. I’m afraid...I’ll hurt them. Like I’ve hurt so many others.”

After they check into a hotel, Dexter leaves Lila behind and goes alone to The Swamp. He takes a seat at the bar and orders a beer from Jimenez. When everyone leaves at closing time, Dexter is still sitting there. Dexter refuses to leave and Jimenez gets suspicious of him. He grabs a baseball bat, and threatens him. Dexter easily takes the bat away from Jimenez and beats him to a bloody pulp. Dexter wants to kill him, but Lila calls at that moment and talks him out of it (though she assumes he wants to use heroin)

Because Dexter is ignoring her, Lila gives Jimenez the address of the bowling alley where Dexter is going that night. When Dexter and Lila are leaving the bowling alley, Jimenez attacks Dexter and slashes his arm with a knife. Dexter only avoids a more serious injury due to a last second warning from Lila and the quick intervention of the other men on his bowling team. Jimenez manages to escape.

Following the attack, Dexter decides to abandon Lila’s advice and kill Jimenez. The next afternoon, Dexter waits for him outside his bar and follows him to an isolated cabin in the Everglades. Dexter turns on the radio in Jimenez's truck and waits for Jimenez to come outside. He injects Jimenez with M99, brings him inside the cabin, and straps him to the table.

When Jimenez wakes up, Dexter collects a blood slide from him. Jimenez tries to bargain with Dexter, offering him cocaine in exchange for his freedom. When it becomes obvious that Dexter is not interested in bargaining, Jimenez turns hostile and threatens to kill him. Dexter then duct tapes his mouth shut and dismembers him with a chainsaw in the same way that Jimenez had killed his mother.

Afterward, Dexter has to leave Jimenez’s body parts at the cabin because of a phone call from Rita Bennett. She asks if he had been at her house because her door was found open. Dexter realizes that Rita’s key is missing from his key ring and that Lila had stolen it. After arranging for police to stay with Rita, Dexter heads to Lila’s apartment. He angrily demands the return of Rita’s key and and asks why she gave the address of the bowling alley to Jimenez. Lila says she wanted to rekindle Dexter’s affections. He warns her to stay out of his life.

The next night, Dexter returns to the cabin to dispose of Jimenez’s remains, but is confronted by James Doakes who now knows that Dexter is The Bay Harbor Butcher. After a struggle, Dexter captures Doakes and makes use of the cabin as a makeshift prison.

While guarding Rita’s house, Dexter falls asleep and has a dream of himself dragging Jimenez’s body through the Homicide Department, leaving behind a trail of blood. Frank Lundy orders him to clean up the mess.

Before Jimenez was killed by Dexter, Jose Garza purchased cocaine from him. Since he never received it, Garza begins sending text messages to Jimenez's phone, which is now in Dexter's possession. Garza has no idea that he is really talking to Dexter, who arranges to meet him in order to kill him.

Francis gives the file to Dexter

Jimenez lurking at the bowling alley

Dexter with M99 for Jimenez

Blood collected for a slide

Dexter carves up Jimenez with a chainsaw, just as Jimenez did to Dexter's mother