Sam Underwood (born 4 August 1987) is a British actor and writer.

He played Zach Hamilton, a wealthy young man and a budding serial killer, on Showtime's DEXTER.

In 2010, he appeared as Marchbanks in Candida at the Irish Repertory Theatre, New York. He then played the part of Alan Strang in Equus at the John Drew Theatre, East Hampton. In 2013, he joined the third season of Homeland as Leo Carras. In 2014, Underwood took on the dual roles of twins Mark and Luke Gray in the second season of the The Following. In 2017, Underwood joined the cast of the series Fear the Walking Dead as Jake Otto.

Underwood was born in Woking, Surrey and attended the Winston Churchill School. He trained at the Karen Clarke Theatre Group (now Summerscales Performing Arts). He was taught by vocal coach Phil Wisdom and attended Songtime Theatre Arts. He moved to the United States in 2006 where he studied at the American Musical and Dramatic Academy in New York. He graduated in 2008 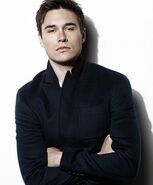