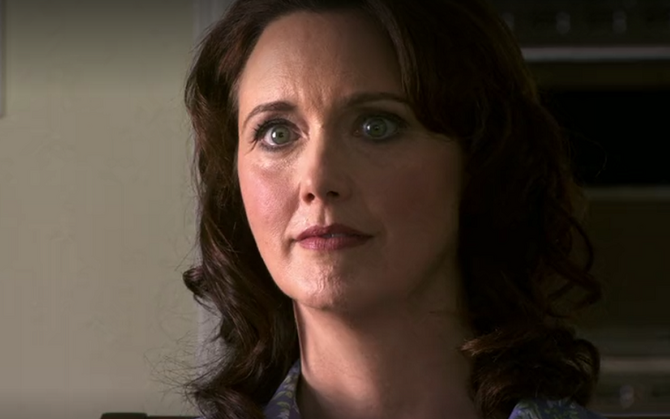 Unknown
Sally Mitchell is a character in the Showtime series DEXTER.

She is the wife of Arthur Mitchell and mother of Jonah and Rebecca Mitchell.

Although a victim in the situation with her husband, she always stays calm, in dread of what her husband might do to the family.

Sally is a woman in her late 40s with long, brown hair and blue eyes with a bright smile. She usually wears dresses with flower patterns, often with an apron.

Sally suffers so much from the effects of spousal abuse that the happy "mask" she presents to the rest of the world is all that she can control in her life. However, on a few occasions, she reveals her fear of Arthur to Dexter by her words and nervous smiles.

Despite this, she loves Arthur to such a degree that she actively puts herself in harm's way to make sure he's safe (from Dexter). Because of Sally's fear and love for her husband, Arthur is able to do whatever he wants to the family. They can relax whenever he is out of town.

At first, the Mitchells appear to be an ideal, loving family. As a pillar of the community, they are church-goers, and work to build homes for the homeless. However, this is revealed to be a facade: Arthur is very controlling and abusive. His wife, fearing her husband, perpetually puts on a cheery facade to appease him. She is even willing to let her daughter continue a a perceived dalliance with Dexter as long as Arthur remains unaware of it.

When the police discover that The Trinity Killer is Arthur Mitchell, the house is raided. Sally and her children are taken into protective custody for questioning.

Following Arthur's "disappearance" (as Arthur Mitchell is assumed to be alive and in hiding), Sally holds onto the fear that he's still out there. However, as time goes by, and she is no longer under the constant watch of her husband, Sally's initial feelings of love for Arthur return. She begins to blame her children for what went wrong in the past, and grows verbally abusive toward them. This drives Rebecca to commit suicide by slicing her femoral artery in the bathtub. Jonah finds his sister dead and, enraged, he bludgeons his mother to death with a hockey stick. Later, Jonah asks Dexter to kill him for what he did, but Dexter refuses to do this and tells Jonah to forgive himself.

Mitchell family working at a Four Walls One Heart site

Arthur joins Sally in the bathtub

Sally and Arthur present their facade to Dexter

Sally and Rebecca cower in fear of Arthur

Jonah, Rebecca, and Sally forced down by the police