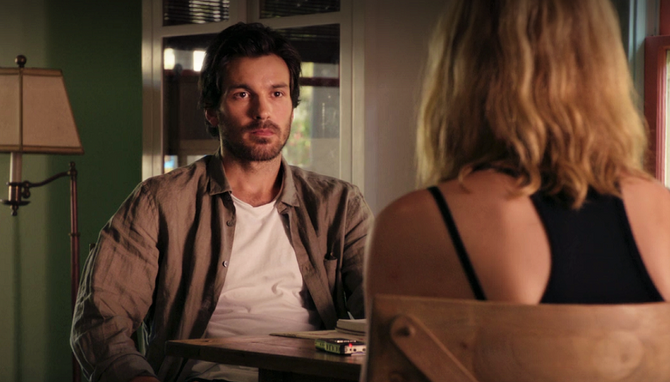 Do the Wrong Thing

Sal Price is a Character in Season Seven of the Showtime series DEXTER.

He is an investigative journalist who writes true life stories about crimes of murder. He is investigating Hannah McKay's involvement in a series of deaths.

Sal is a tall and good-looking man with a slim build. He has neatly combed curly brown hair and facial hair.

Sal is an intelligent, friendly, and charming man. He is also slightly shady, as he paid Hannah's father, Clint McKay, to get stories about her for his book. Despite this, he knew when not to write stories about others, as he refused to write one about Debra's Ice Truck Killer incident, realizing that it would hurt her.

He is immediately attracted to Debra and, at Dexter's urging, she begins to date him.

Sal also has an odd habit of chewing on objects, such as straws and pens, a habit that ultimately costs him his life at the hands of Hannah.

When he was younger he wrote about the Wayne Randall and Hannah McKay killing spree, depicting Wayne as the lone killer and Hannah as his unwilling accomplice. He also wrote books about the Chautaqua Park Creeper and murder of Christy Lawson.

He returns to Miami when he suspects that Hannah is murdering people close to her. They include her counselor at a halfway house, her husband, Jake, and her mentor, Beverly Grey. He obtains a sample of Beverly's blood and runs a tox screen. The results come back positive for Aconite, but that alone is not enough to charge her for murder.

Sal comes by Miami Metro Homicide in regards to the new bodies found in the Wayne Randall killing spree in search of more evidence. He talks with Lieutenant Debra Morgan and begins pursuing her. At the same time, he has his own blood-spatter analyst look at the bodies. Outside the station, he meets Debra's brother, Dexter. At some coaxing, Sal reveals information to Dexter about the book he is writing, and the counselor that Hannah killed, He then asks Dexter to recommend him to Debra.

Debra and Sal soon go on a date where Price reveals his suspicions to Debra about Hannah and they decide to work together to bring her down. They head back to Deb's place and work out the next step in their plan, which leads to having her dead husband Jake Kirkwood's body exhumed. The briefly kiss and part ways for the night.

The next day, Sal discovers Hannah being dropped off at her house by Dexter, and sees them they kissing. He immediately confronts Dexter and says that he is going to publish the story on Hannah unless Dexter gives him Wayne Randall's last words before he committed suicide.

Sal approaches Hannah in person at the flower mart and tries to talk to her. She initially brushes him off until he threatens to reveal Dexter's relationship with her and, as a result, she reluctantly agrees to an interview.

When Sal meets Debra for lunch, she informs him that Jake's body wasn't embalmed and they cannot connect Hannah to his death. Following this, he goes to Hannah's place for his interview with her. As she tells Sal about the couple that she and Randall killed, she breaks down in tears. While Sal isn't looking, Hannah slips poison onto his pen knowing that he compulsively chews on it.

That same evening, Sal arrives at Dexter's apartment for an interview with him. Having obtained Sal's DNA from his house, Dexter threatens to frame him for the murder of Christy Lawson unless he backs off from Hannah and him. Sal becomes angry and yells at Dexter when, suddenly, he grabs his heart and drops to the floor. Dexter performs CPR and orders his nanny, Jamie Batista, to call an ambulance, but it is too late. Debra tells Dexter that she knows that Hannah is responsible for Sal's death.

Sal and Hannah at Flower Mart