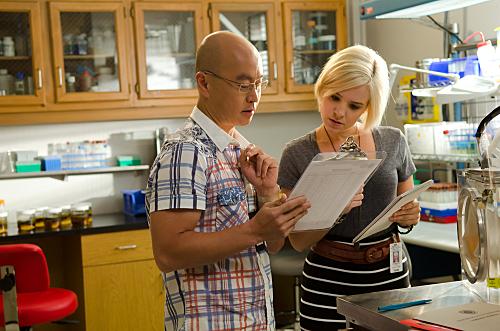 Forensic Intern
Ryan Chambers is a character in Season Six of the Showtime series DEXTER.

She is a newcomer to the Forensics department in Miami Metro Homicide, originally the runner-up to fellow student Peter Layton. She works alongside Vince Masuka during the Doomsday Killings acting as his partner in the case. However, Masuka fires her when he discovers that she had stolen and sold the Prosthetic Hand.

Debra Morgan and Vince Masuka describe Ryan as "the hot chick." She has mid-length, poofy blonde hair, and lightly tanned skin. According to Masuka, she has "remarkable breasts and buttocks." She generally wears dresses or fashionable mini-skirts with tank tops underneath a lab coat, bringing corporate casual to the very limit. It is also revealed that during the Ice Truck Killer Case, she painted her fingernails five different colors just as the killer had done with his victims.

Ryan is a flirtatious and intelligent young woman. When first introduced, she appears as a patient and eager student ready to enter into the forensics field. She understands Vince's attraction to her and doesn't turn him away, rather she toys with him a bit before he gains the courage to ask her out on a date.

Ryan: "Is this what I think it is?"
Masuka: "Evidence from the Ice Truck Killer Investigation. You said in class how you were really into this case".
Ryan: "Are you kidding? I was...obsessed with this case. I followed it night and day."

She has a fascination with "people who do bad things." She first expresses this in the Doomsday Killer Case, while admiring the style of this killer. She is also intrigued by several other cases, such as The Trinity Killer and The Bay Harbor Butcher. When Masuka brings her the evidence box for the Ice Truck Killer Case, she is thrilled. She proves to have a bad side herself when she later steals the arm, sticking it into her handbag, before going out to dinner with Vince. She then sells the arm on an auction website, Buythistreasure.com, to obtain money to pay her rent.

This incident results in Vince Masuka firing her as his intern, leaving the spot is open to Louis Greene, who ultimately turns out to be the buyer of that very arm.

Ryan attends the University where Vince Masuka teaches a class in Forensic studies. Along with several fellow students, including Peter Layton, she takes a tour through the Miami Metro Police Department guided by Professor Masuka. He leads them up to the Homicide Department and shows off his Forensics Lab. He explains the purpose of the students being there to coworkers, Debra Morgan and Angel Batista, and introduces each of them. Ryan focuses her attention on Batista who looks away from her on multiple occasions. Quinn catches onto this and gives off a smirk.

She's next seen outside of the crime scene where Omar Rivera was killed, snapping photographs with her phone. Masuka tells the group that only the most worthy will become his understudy as he stares at Ryan. At first, Ryan isn't chosen to be Masuka's intern in favor of the man who placed the highest test scores, Peter Layton. However, when Peter views Omar Rivera's body, he faints on scene and Masuka quotes the following: "Good-bye big guy...hello runner-up, little miss hottie!"

Vince begins working with Ryan when he receives the baby snakes back from the medical examiner. She inquires about procedures when running tests, and Vince informs her of how to handle evidence. She takes a seat on a stool, spinning it back and forth, as she examines a snake in the beaker. Vince asks if they make her squeamish to which she smiles and replies, "Not at at all." As she continues to observe the snakes, Masuka observes something else (her behind). Sergeant Angel Batista approaches Vince to warn him about the potential lawsuit if he even tries to touch her but Vince shrugs it off.

Ryan approaches Masuka while he is recording a message to tell him that the toxicology reports on the snakes have returned. They reveal trace amounts of metal present in the stomachs of the baby snakes that had been passed on by the the snakes' mother. This proves that they had lived in a toxic environment. Then the following dialogue begins:

She walks off with a smile while Vince sighs with relief, dodging a lawsuit.

Ryan appears at the crime scene for Rosalia Davalos and assists Vince with the forensics, while Dexter notes Rosalia's cracked tooth.

Back at Homicide, Vince approaches Ryan with a box claiming that it's a gift for the good work she's been doing. He reveals that it's evidence from the Ice Truck Killer Case, saying that he remembered her interest in the subject from class. Ryan admits to her obsession over it, following it day and night. Vince first takes out the ID used for the alias "Rudy Cooper" and then the prosthetic hand worn by Monique, a prostitute that Brian Moser killed. She looks on with fascination as she tells Vince that she wore her fingernails the same way for over a week when the details were first released. She asks what will happens to all this stuff, and Vince tells her that it just remains in evidence. Vince takes the hand from her gently, and replaces into the box.

The following night, Vince finally works up the courage to ask Ryan out. He asks her to go out for some Phở (pronounced 'fuh', though in the context of a subtle joke it sounds as if he's making a sexual pun when he really isn't). He tells her that it's a Vietnamese dish (a big bowl of noodles with broth). He expects to be turned down and possibly receive bodily harm, but she immediately says yes with a smile. He is obviously surprised by this and she tells him that he should be a little more confident in himself, even claiming that he looks a bit cute in the right light. Later, before they head out to dinner after work, she's seen stealthily going through the Ice Truck Killer evidence box and placing the Prosthetic Hand in her bag to take with her.

Vince discovers that Ryan stole the hand and sold it online for rent money. She tries to defend her actions and convince Masuka that she really is into him. Because she had endangered his job, Vince is furious and feels used. He immediately fires her.

Ryan snapping pictures of a crime scene with her phone 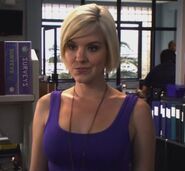 Ryan reveals that she doesn't mind Vince's attraction to her 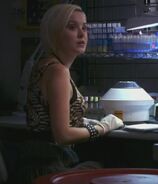 Ryan in one of her many different outfits

Ryan agrees to go out with Vince

Masuka asks Ryan out for dinner