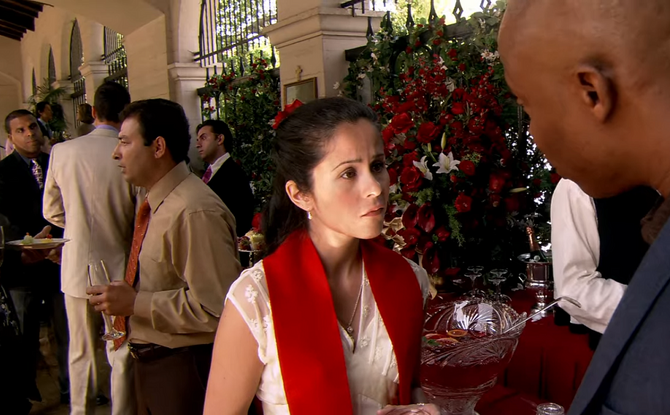 Rose Guerrero is a character in Season One of the Showtime series DEXTER.

She is the teenage daughter of Carlos and Celeste Guerrero. Her father is a major player in the drug ring that Sergeant James Doakes and the Miami Metro Police Department investigate in order to bring Guerrero to justice.

She appears to be a kindhearted individual with a sense of responsibility and a strong faith in her Church. She is seen with a smile, until she is told about the death of a cop and his wife after which she expresses sorrow. It surprises her when James Doakes accuses her father of murdering Ricky Simmons and his wife Kara.

She likely had no knowledge of Carlos's illegal activities. Despite what her father was involved in, he apparently cared enough about her to not involve her in his criminal life.

After the death of Ricky Simmons and his wife Kara Simmons (with whom Doakes had a relationship), the Sergeant went uninvited to the celebration of Rose's Confirmation. Following her meeting with the Bishop, Rose greeted Doakes with a smile as he introduced himself. She sounded sincere in her condolences when hearing of his investigation into the death of an undercover cop and his wife. Rose asked if they were part of the Church, and Doakes said they were not which left her confused. He then showed her a picture of (assumed to be) Norberto Cervantes.

Just then, her father, Carlos Guerrero, rushed over and warned Doakes to step away from his daughter. One of his men held him back and Guerrero somewhat calmed down. He asked Doakes why he would confront him at his Church and in front of his family. Doakes then informed everyone that Guerrero murdered a cop and an innocent lady. He specifically looked over at Rose who came to her father asking what he's talking about. This put Guerrero in a tough position with his innocent daughter present. A lady arrived (likely Guerrero's wife and Rose's mother) who took Rose away from the situation.

This confrontation, which resulted in Rose being made aware that her father was possibly involved in illegal activities, put Doakes on Carlos's radar. When Detective McNamara and several other members of Miami Metro Homicide raided the house of one of Guerrero's Lieutenants (resulting in a vicious assault on the Lieutenant), Doakes was singled out as being responsible due to his earlier transgression. He was then constantly followed by Guerrero's men and turned into bait. Eventually, Carlos was arrested after being caught attempting to kill Doakes in a parking garage.

It is unknown what happened to Rose after her father's arrest. It is likely she remained with the church.

Rose thanks the Bishop
Add a photo to this gallery
Retrieved from "https://dexter.fandom.com/wiki/Rose_Guerrero?oldid=123782"
Community content is available under CC-BY-SA unless otherwise noted.