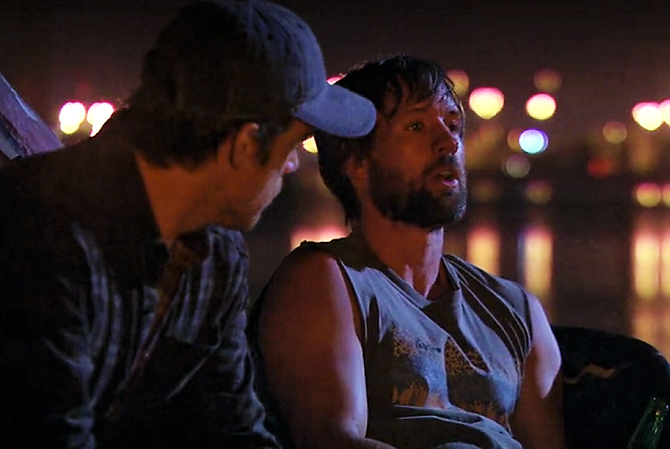 Robert Brunner is a character in Season Five of the Showtime series DEXTER.

He is a parolee that Lumen Pierce suspects is one of her rapists and targets him.

Brunner is a man with a dark brown beard that covers most of the lower half of his face. He has mid-length, brown, unkempt hair and green eyes. His attire consists of dirty blue jeans and a sleeveless shirt. He's later seen in just the jeans.

From his past crimes, Brunner can be seen as a very violent person who used whips or otherwise to cause bloody scars on his rape victim's back.

Brunner tells Dexter that he doesn't tolerate child molesters, but Dexter assures him that he was arrested for having an affair with a girl who didn't know the meaning of implied consent. Brunner then lets Dexter sit with him, having a personal understanding of people like him.

On top of this, Brunner thinks highly of his prison buddy, Boyd Fowler, likely because the two of them are sexual deviants of the same nature. This is one of the reasons that Dexter believes Brunner was involved in Boyd's crimes.

While Brunner talks like an ex-con with his "Where'd you do time at?" and "That's a tough place to stay in" attitude, he suddenly switches to a rapist's persona when talking about "farm-fresh pussy" and his future plans.

Brunner is responsible for the abduction, torture, and rape of a woman, proving that he has a violent streak. He was given seven years in prison for sexual assault, but was released after three for good behavior. While in prison, his cell mate was Boyd Fowler.

Lumen Pierce is determined to find the men involved in her abuse and torture other than Boyd Fowler. Due to a letter she finds in Boyd's house, she comes up with the face and name of a rapist who matches her situation perfectly, Robert Brunner.

Dexter Morgan ends up doing a little research of his own on Brunner, after finding Lumen's bloody fingerprint on an envelope in Boyd's house. His victim's photos are consistent with the wounds and patterns of assault on Lumen (specifically, the scars on her back). He goes hunting for Brunner in his newly acquired home under the Julia Tuttle Causeway, a somewhat forced retreat for folks of his nature (rapists, molesters, etc.)

When Dexter locates Brunner, he is watching a documentary about Japan on a television, while drinking alcohol. Brunner assumes Dexter is a pedophile and quickly writes him off as such...telling him that kid fuckers stay by the tracks. Dexter quickly adopts a grizzled accent, stating that he slept with a stuck up co-ed that had a problem with understanding the word "consent." Brunner keeps an eye on him for a second and then lets him sit down next to him. Dexter (under an unknown alias) claims he did his time in Okeechobee, with Brunner replying that his last stretch was in that "shithole." He says that, once his parole is done, he is going north to get some farm fresh pussy. Brunner begins to describe what he and his friends did two weeks ago with a blonde they had on "all-fours." Dexter likely assumes Brunner is talking about Lumen, and injects him with M99.

Dexter takes Brunner to the vacant tourist center, where he had previously intended to kill Boyd. In his mind, Harry protests to this kill as being an act of impulse rather than sticking with the code. Dexter argues back that that Brunner is one of Lumen's attackers, and that he fits the bill. Dexter begins to set out picture of Boyd's victims, believing that Brunner was involved. However, when Dexter cuts Brunner's pant leg, he discovers an ankle bracelet, which causes him to drop his blade. He can't believe that he almost made a mistake. Dexter takes Brunner (still unconscious) back to the bridge area and dumps him out of his car as fast as he can. He then goes home, but is greeted by a someone he didn't want to see there... Detective Joey Quinn.

The next day, Dexter tries to confront Lumen at her motel room, but finds out from the clerk that she has already left for the bridge. He hurries to catch up with her (as he knows she's intent on taking Brunner's life). As Lumen wanders the area looking for Brunner, she seems nervous but resolute. Lumen eventually locates her target, who is now without his shirt, and looking like he woke up from a hangover (most likely, the after-effects of the sedative). It's unknown if Brunner remembers Dexter's face, but he doesn't seem to be in a hurry to find out what happened the night before. Instead, he pulls his shirt on and takes a coffee from another con. From a distance, Lumen shakily points a revolver at him. (By using a magnum with her body type, the kickback would likely force the bullet to miss, and alert every con in the vicinity. Also, the bullet might be traced back to the gun, but it's unknown if it is registered to her.)

Lumen has trouble keeping aim, but she eventually gets a clear shot. Just before she pulls the trigger, Dexter intervenes, grabbing the gun from her. She is furious until he informs her why Brunner is not one of her rapists. A look of anguish crosses Lumen's face, knowing what she might have done. Brunner catches wind of the commotion behind the pillar where she and Dexter are hiding, but goes back to his business.

Letter from Brunner to Boyd Fowler

Brunner allows Dexter to sit with him