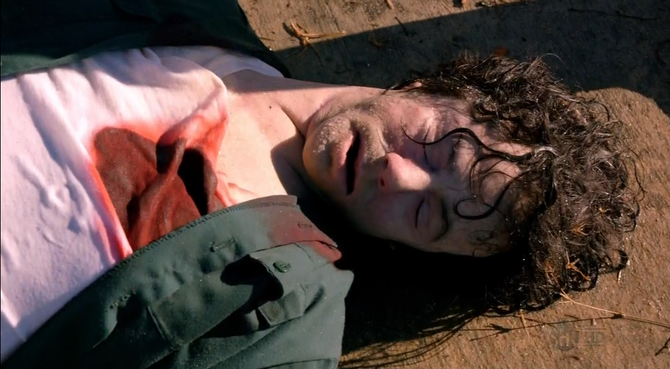 Shot in the chest by Oliver Saxon.

Robert Bailey is a character in Season Eight of the Showtime series DEXTER.

He is the first shown victim of The Brain Surgeon.

Dexter Morgan is called to a crime scene where the corpse of a man was found lying near a body of water. Appearing to have been simply shot and dumped, the man is identified as Robert Bailey, a mechanic. In further examination, Dexter lifts the head to reveal that the back of the skull had been cut open and a portion of the brain scooped out, likely with a melon baller. The murder weapon was found discarded in a bush not far from the body.

Back at the Miami Metro Police Department, Deputy Chief Thomas Matthews briefs detectives involved in the case and brings in a consultant named Dr. Evelyn Vogel, an expert neuropsychiatrist with whom Matthews had worked with before and who had moved back to Miami. She focuses on why the killer carefully extracted a specific portion of the brain, the anterior insular cortex, the part of the human brain that processes empathy. She finds it ironic that the very hallmark of a psychopath is that they have no empathy.

Vogel states that it may be a coincidence, but if someone were to go to this much trouble in removing a particular core of the brain, they must have put deep thought into the process. She hypothesizes that it was either an experiment or a message, which wouldn't be the first time a killer has used a victim to communicate.

Details of Bailey's murder are revealed via the medical examiner's report. He was first shot and the removal of the brain section was performed after his death. The victim had been kept in captivity in an enclosed space for a minimum of five days, as there were no contents present in his stomach, showing dehydration. Vogel is confidant that such a carefully thought out ritual suggests that the killer has claimed lives before, and will most likely strike again.

Portion of brain is missing
Community content is available under CC-BY-SA unless otherwise noted.
Advertisement