Dexter Wiki
Register
Don't have an account?
Sign In
Advertisement
in: Has Disambiguation, Deceased, Characters,
and 18 more
English

View source
watch 02:03
Who is Rita Morgan?
Do you like this video?
Play Sound 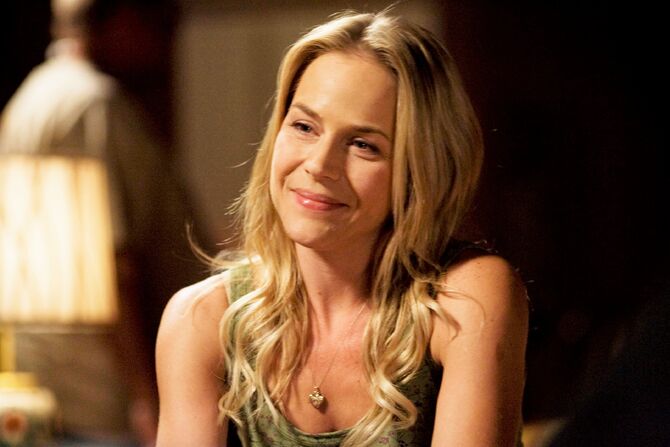 For four seasons, she was Dexter Morgan's "significant other." She had two children, Astor and Cody when she met Dexter and later, after she married Dexter, gave birth to a third child named Harrison.

Rita was a loving mother who previously was in an abusive marriage with Paul Bennett. Due to her violent past, Rita initially avoided sex with Dexter. This was one of the reasons he kept seeing her as he considered himself emotionally removed from humanity, and thought that if Rita got too close to him, she would sense his darkness. Dexter felt that Rita was a perfect girlfriend because she was as damaged as he was in her own way.

Rita was completely unaware that Dexter was a serial killer, and it delighted her that he was great with her children. Rita began to develop more confidence in herself, along with a growing sexual attraction to Dexter.

Rita, despite not liking violence, had season tickets to the Florida Panthers, and her favorite sport was hockey.[1]

At first, Rita tended to be naively unaware of Dexter's flaws. Later, a complicated situation involving Lila West (in which Rita and Dexter broke up and later reconciled) changed the fundamental nature of their relationship. While Rita had previously paid his long absences and flimsy cover stories no mind, she began to pick up on Dexter's lies and question his erratic behavior. After they were married about six months, they entered marriage counseling when she learned he had secretly kept his apartment. For a time, she was moody and easily annoyed, feeling that he had violated her trust.

Rita Bennett was born Rita Ann Brandon in Ashley, Michigan, 19 April 1973 (approximate date) to mother Gail Marie Brandon and an unknown father (possibly deceased). Not a great deal of her early life was known, although it was revealed via a marriage certificate from when she was sixteen years old, that she lived at 321 Elmview Lane in Ashley, MI 48806. Her husband at the time was John Alan Ackerman, a 21-year-old mechanic whom she married on 16 August 1989. On 6 January 1990, they divorced (as Dexter felt, due to a brief teen romance). After this, Rita moved to Miami. In "Circle of Friends," Rita told Dexter that Paul owned their house before she met him.

Rita married Paul Bennett after becoming pregnant with Astor. They later had a son, Cody. The marriage would prove to be an unhealthy one, leading to her being abused at the hands of Paul and having to deal with his drug addiction.

After a domestic disturbance call, Paul was arrested by Debra Morgan, which prompted Debra to set Rita up on a date with Dexter. Their first date was awkward for both of them. Rita had just escaped a dangerous relationship and Dexter happened to be a serial killer (although this was not revealed to her).

Dexter used this date as an opportunity to watch his next target, Marcetti. When Marcetti stood up to leave, Dexter followed suit. To be polite, he paid for the dinner, saying that he was ill and it was a pleasure to meet her.

Rita called Dexter later that night, while he was discarding Marcetti's body parts into the ocean. She asked how he was feeling, and told him about her two kids and domestic problems, but he said that Debra had already told him. Rita remarked that he seemed to know all about her, with Dexter replying that he would like to know more. He suggested that they get together again sometime, and Rita liked that idea.

Dexter's attachment to Rita and Rita's devotion to Dexter continued to grow, until their eventual marriage. This was cut short when Rita was murdered by Arthur Mitchell aka the Trinity Killer, as punishment for Dexter's constant pursuit of him - and to remind Dexter that he can never escape his demons.

Rita was portrayed as a loving mother of two who was slowly recovering from the abuse by her (eventual) ex-husband, Paul.

Dexter's initial reason for continuing to date Rita was to maintain his cover of appearing to be normal. Dexter stated that he chose Rita because she was as damaged as he was. The fact that she avoided sex benefited Dexter since he felt that getting too close would reveal his darkness. Eventually, their relationship was consummated and they continued to be intimate.

Rita always remained innocently unaware of how he really spent his free time. However, Dexter did make a couple of weak comments that referred to it. On their first date, he half-jokingly said that he was an ax murderer. At another time, he told Rita that he had a "dark side" but didn't hurt "innocent people." Rita was merely amused by his comments.

Rita stood up to Paul by demanding that he sign the divorce papers that he refused to sign while in prison. To persuade Paul to do so, she offered him supervised weekly visits. At first, Paul tried to intimidate her, but then agreed to sign them after she did not back down. One night, Paul came to the house drunk, and Rita reluctantly let him in. He began to abuse her and wrestled her onto the bed. Rita managed to escaped by knocking him out with a baseball bat. Paul then sued Rita for custody of the kids. Dexter, fed up with the situation, took the matter into his own hands. He knocked Paul out with a frying pan and brought him to his motel room. Dexter injected Paul with heroin, and notified the police. Paul was then set back to prison, not fully aware of what had happened. After he thought about it, Paul pleaded with Rita to not to let Dexter near their children, claiming that Dexter had framed him. Rita did not believe Paul and brushed him off. Later, though, she found Paul's shoe outside of her house—just where he said it would be when Dexter knocked him out.

After discovering what Dexter set up Paul, she suspected that Dexter owned the drugs he had injected into Paul. Dexter allowed her to think that he was a heroin addict, as it was better than admitting he was a serial killer.Rita forced Dexter into Narcotics Anonymous by threatening to leave him when he expressed reluctance. While Dexter was working through the program, Rita suspected (incorrectly) that he was having an affair with his sponsor, Lila, and broke up with him. In anguish, Dexter then turned to Lila, and they ended up actually having sex. Before that, it had been (on his part, at least) a platonic relationship. When Rita attempted to reconcile with Dexter, she learned that his relationship with Lila had turned into a sexual one. Grief stricken, Rita made their break official, although her children still tried to maintain a relationship with Dexter. After Dexter lied to Lila about working late (he had gone to kill Jimenez), Lila broke into Rita's house, afraid that they had rekindled their relationship. Angered that Lila had done that, Dexter broke up with her, telling her to stay away from him and Rita. The next day, Dexter apologized to Rita for his infidelity, saying that Lila was one of his biggest mistakes. Later, Rita called Dexter and stated that she had "feelings for him." Dexter's breakup with Lila, his caring behavior with Rita and her children, and his sincere regret over the things he'd done convinced Rita to start dating him again. By the last episode, their relationship was back on solid ground.

Rita was enjoying her relationship with Dexter once again, when she unexpectedly discovered that she was pregnant with his baby (later revealed to be a boy). Feeling that being a single parent was one of her few achievements, Rita decided to keep the baby, and left Dexter's role in the child's life entirely up to him. After much deliberation, Dexter decides with the help of Debra (and an ensuing punch from her), along with a close call with death, that he would be there for his son. Rita eventually accepted Dexter's marriage proposal, after he repeated the lines he heard from an obsessive stalker. Meanwhile, Rita was fired from her job at the Z Hotel when she was rude to an obnoxious customer. Later, her friend, Sylvia Prado, a well-off real estate agent, hired Rita as her assistant. In the finale, Dexter discovered that Rita was briefly married at age sixteen, something she never told him. She also lied outright when he subtly asked her about it. After some reflection, he decided to let Rita keep her secrets as he would be keeping his own.

After the baby (named Harrison after Dexter's father) was born, Rita and Dexter moved into a house in the suburbs. Rita soon noticed a pattern of lies by Dexter, including lying about the concussion he suffered in a car accident, how serious the accident was, and the fact that he kept his old apartment. Rita and Dexter then went to a marriage counselor, who sorted out their problems. However, another problem arose when their neighbor, Elliot Larson, began to fall for Rita. On Thanksgiving Day, Elliot kissed Rita and pointed out that Dexter was never home. Although Rita initially kissed him back, she quickly ended it before it went further. Rita revealed the kiss to Dexter, but it concerned her that he didn't seem to care that she nearly cheated on him. Soon after, Rita was pleased when she observed Dexter punching Elliot over it.

In the finale, while Dexter was pursuing The Trinity Killer, he sideswiped another car. After an argument with the driver of the damaged car, Dexter was arrested. Rita picked up Dexter from the police precinct and he apologized for losing control of the situation. Rita told Dexter that he was an integral part of their family and she would be crushed if he went away. Dexter discussed his demons but she assured him that any demons he had could be conquered.

Dexter begged Rita to leave early for their honeymoon, and she agreed. Later, after Dexter murdered Trinity, he returned home to find a voicemail from Rita. It said she was returning home to pick up her forgotten ID and would take a later flight. Dexter called Rita's phone and was surprised when it rang from inside her purse on the table. He then heard his son, Harrison, crying, and found the baby sitting in a pool of blood, and Rita's lifeless body lying in a blood-filled bathtub. She was the last murder of the Trinity Killer. Dexter appeared to be genuinely devastated by her death. He flashed back to his own childhood trauma, before he picked up Harrison and carried him away, exactly like Harry did with Dexter.

Rita makes a small appearance in Dexter: The Game. She goes out with Dexter to the Crab Festival after Dexter finishes with Jamie Jaworski. After participating on the festival with Dexter, the latter interrupts their date to focus on a new victim of The Ice Truck Killer who appears to be near the festival.

Rita watches Dexter walk over to a crime scene

Rita and Dexter on a date

Rita cries during a sad movie

Dexter tells Rita he has a dark side, but she laughs

Armadillo swept out by Dexter

Dexter admits he had sex with Lila West

Rita and FBI at Dexter's door

Rita realizes that she is pregnant

Wedding of Rita and Dexter

Dexter and Rita at neighborhood barbeque

Rita and kids return from a trip

After her death, Dexter tells Rita that he is a serial killer

Rita in her casket