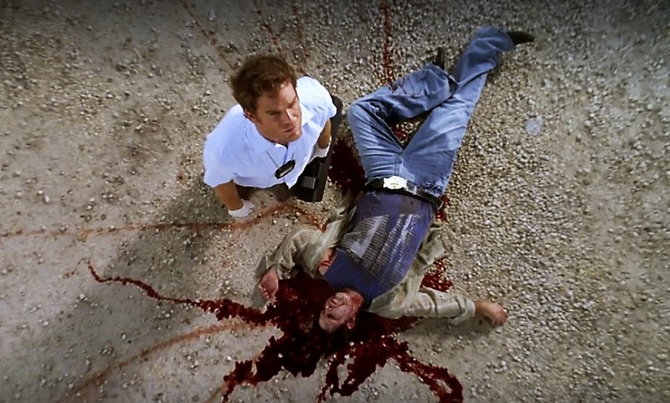 Killed by Norberto Cervantes on
the orders of Carlos Guerrero

Miami Metro Police Department
Officer Ricky Simmons is a character in Season One of the Showtime series DEXTER.

He was a Miami Metro police officer, who was killed while working undercover.

Simmons successfully infiltrated Carlos Guerrero's criminal organization with the intention of busting him. His wife Kara Simmons wanted him to come back, forcing a strain on their relationship, and Sergeant James Doakes urged Captain Thomas Matthews to call him off the case. However, Ricky was intent on staying in and this resulted in Kara forming a relationship with Doakes filing for a divorce. After ten months of working undercover, Carlos found out that he was a cop and had him killed by Norberto Cervantes. His body was found under the bridge from where he was thrown.

Before Simmons died, he took a bite of flesh from the arm of Cervantes. This aided in his capture as Cervantes had bled on the floor of the Simmons residence where he shot Ricky's wife, Kara Simmons. Kara was found alive by Lt. Maria LaGuerta and Sergeant James Doakes, but she later died. Later, Guerrero had Cervantes killed while being held in jail, awaiting trial.

A funeral was held for Ricky, where Detective McNamara gave a eulogy remarking about his sister Kara and their relationship together. LaGuerta gave a press appearance referring to Ricky as a hero and Doakes approached Mac and Officer Smith to express his condolences. Ricky was cremated and his ashes spread into the Miami bay.