He played Andrew Briggs, a jewelry thief, on Showtime's DEXTER.

Coiro got his start on Broadway but is best known for his on-screen roles.

He was born Santo Stefano in Aspromonte Calabria, Italy. Coiro is married to director Kat Coiro. They live in Los Angeles with their three children. 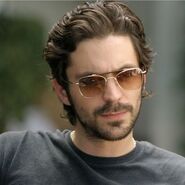 Add a photo to this gallery
Retrieved from "https://dexter.fandom.com/wiki/Rhys_Coiro?oldid=72578"
Community content is available under CC-BY-SA unless otherwise noted.