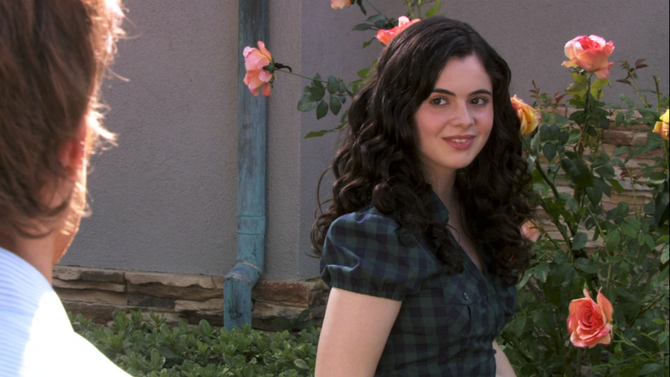 Due to mental abuse by her mother, she committed suicide by slicing her femoral artery in a bathtub. (This caused Jonah Mitchell to angrily blugdeon their mother to death.)

Student
Rebecca Mitchell is a character in Showtime's series DEXTER.

She was the daughter of Arthur Mitchell and Sally Mitchell while also being the younger sister to Jonah Mitchell.

Unfortunately, Rebecca was another victim in Arthur's madness. He often called her "Vera" rather than by her real name and treated her over-protectively. While she was allowed to attend ballet classes and school activities, at home she was often locked in her bedroom by Arthur. To him, Rebecca represented his deceased sister, Vera, whom he worshiped and wished to preserve. Vera's ashes were kept in an urn and Arthur forbid anyone to touch it.

Although Rebecca was a teenager, her bedroom resembled one belonging to a very young girl. After she ran away once, Arthur installed locks on the outside of her bedroom door and on the windows. When Dexter Morgan questioned Rebecca about this, she pressed him to take her away, implying that she would give him sexual favors in return (which Dexter flatly refused). However, Rebecca was skeptical that Dexter wanted nothing from her. When her mother caught Rebecca making advances to Dexter, she was terrified that Arthur would find out about it. Sally assumed that Dexter had or will have sex with her daughter, but he denied it and promised not to tell Arthur about Rebecca's behavior.

Arthur was not as physically abusive towards his daughter as he was toward his wife and son. He rarely criticized her (although very controlling), called her his "perfect child," and frequently discussed her achievements with pride--as opposed to Jonah. However, Arthur could be verbally and physical violent toward her when provoked. While Rebecca may have loved her father on some level, she was as frightened of him as Sally and Jonah.

After the police discovered that "The Trinity Killer" is Arthur Mitchell, they raided the home and took Rebecca, Sally, and Jonah into custody for questioning.

After Arthur's "disappearance," Rebecca and her family were put into protective custody and moved from Miami to Kearney, Nebraska. Her life didn't get much better as she was forced to live with the constant verbal abuse of her mother who blamed both of her children for their circumstances. Her mother's continual love for Arthur and desire to be whisked away by him eventually drove Rebecca to commit suicide by slicing her femoral artery in the bathtub. Her cause of death caused police to believe that Rebecca, along with her mother, Sally Mitchell, were killed by "Trinity" as they were unaware of his death at Dexter's hands.

At first, Dexter thought that her brother, Jonah, killed her. However, after he took a trip to Nebraska, Dexter changed his mind. Jonah revealed that Sally had continued to blame the kids for Arthur's actions. Rebecca finally had enough of it and committed suicide in the same fashion that The Trinity Killer had killed his bathtub victims. Jonah then lost his temper on his mother and bludgeoned her to death with a hockey stick. 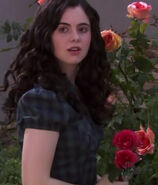 Rebecca and her parents

Mitchell family working at a Four Walls One Heart site

Arthur instructs Rebecca how to water

Sally and Rebecca in fear of Arthur

Jonah, Rebecca, and Sally forced down by the police