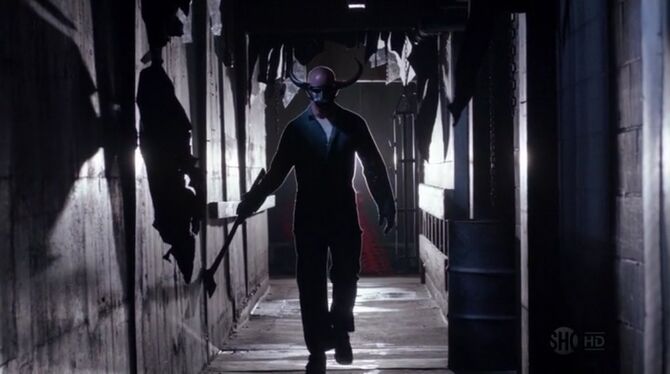 Stabbed in the chest and then cremated by Dexter Morgan.

Brown, shaved
(mid-length, when grown out)

His bare hands, or an axe

Ray wears a horned helmet and acts as a Minotaur in a handcrafted maze, He chases his victims before either brutally beating them or maiming them with an axe.

He killed single women who were willing to have sex with him. They all resembled his mother who, during his childhood, he could hear having frequent casual sex with various men in a nearby bedroom. Because of this, he had grown to both desire and despise his mother.

Ray Speltzer a.k.a. The Minotaur Slayer is a character in Season Seven of the Showtime series DEXTER.

Ray is a dangerously unstable serial killer, who has a bizarre killing ritual. He stalks women through a self-constructed maze, while wearing a horned helmet. He then brutally beats them to death, and rips off their earrings to keep as trophies.

Ray is a tall Caucasian male with a fit, muscular build. His body is fairly ripped, as he exercises daily at a local gym and injects steroids. He normally allows his hair to grow to a moderate length, although he shaves it off when he's ready to kill again.

His casual clothing consists of short-sleeved shirts and jeans, aside from workout clothes. For his job in a cemetery as a gravedigger, he wears a uniform.

During his kill ritual, he wears a black, bull-horned helmet that covers the top of his head. While his eyes and mouth can be seen clearly through the helmet, his nose is not. In addition to this helmet, he has a bull-horned mask (with the top revealing his cranium) designed in a similar fashion. He also wears a dark outfit, similar to a worker's jumpsuit.

Speltzer is a very muscular, rather brutish guy who has notable strength. He can normally overpower his adversaries, and does not rely on martial arts or close-quarters combat. During his fight with Dexter Morgan, it is shown that Dexter is more skilled in combat than Speltzer. Although Dexter is forcefully attacked by Speltzer, he is able to elbow Speltzer in the back, slam him around the camper, and pin him to the floor. It ends when Speltzer uses his strength to grab a nearby object and knock Dexter unconscious.

Ray is a smug, high-strung man, who has a fixation about stalking and murdering women. According to Debra Morgan, he selects his victims based on how they appear in comparison to his own mother (who she feels he wanted to sleep with). He uses his strength effectively in brutally beating his victims to death.

He takes joy in the hunt, often grinning behind the mask he wears to make himself resemble a Minotaur inside his handmade mazes. He enjoys a challenge and states that he, "likes it when they're strong." This does not work with Dexter, however, who escapes from his master-maze, and takes out Speltzer soon afterwards.

In regards to his victims, he has no respect for them, as he is seen at Melanie Garrett's funeral, smirking and taunting Lieutenant Debra Morgan.

Ray appears around the time that Debra Morgan discovers the truth about her brother, Dexter - that he's a serial killer. The two are at odds, with Dexter trying to work his way past the growing gap between them, while Debra refuses to accept what Dexter does. The pressure she's placed upon him is causing him to experience delusional imagery.

In an attempt to win her favor (and satisfy his need), he brings out a file on a parolee who is a probable murderer named Ray Speltzer. Dexter views Ray as a perfect kill. For once in his life, he brings Debra in on his methods of tracking his victims, while locating evidence to be certain of their guilt. Debra remains strongly opposed to the idea of what he does, believing that criminals should be dealt with by law enforcement. However, she begins to waver when Dexter tinkers with her "lizard brain," and she suspects that Ray is a present danger.

To gather evidence, Dexter breaks into a mausoleum in Briar Cemetery and finds one of Ray's trophies -- Nina Fleischer's earring.

Ray lures Melanie Garrett to his house, making it seem as if he intends to sleep with her, but he soon turns the tables by bringing her into his self-constructed maze. He proceeds to slowly stalk Melanie while wearing his helmet, as she desperately tries to escape.

Following her hunch, Debra decided earlier that night to swing by Ray's house to keep an eye on him. As she's about to leave, she takes one last look at the house and sees rapidly flashing lights within the windows, sparking her curiosity. She approaches the house and knocks on the door, before kicking it in when she hears loud screams. She searches for Ray and his potential victim while very loud music plays inside. She eventually encounters Ray, who knocks her down, along with her gun (which slides under some barbed wire that injures her arm). Ray stands above her, ready to take her life, only for Dexter to arrive from behind and knock him out with a plank. Debra yells at Dexter to search for Melanie and they find her dead, having been viciously beaten. Ray uses this time to escape and quickly takes off in his car.

The find Nina's earring in the mausoleum missing and learn that the house didn't belong to him. It was in foreclosure and he had broken into it to set up his maze.

Miami Metro Homicide is informed that Speltzer was arrested after it took four officers to take him down. Sergeant Angel Batista initially speaks with Ray in the interrogation room, and deliberately works up Ray's anger toward women before Debra enters to turn the tables. Once she arrives, Debra provokes Ray by accurately reading his reason for the murders - his mother. After she hints at a possible sexual infatuation from Ray towards his mother, he explodes and stands up. He confesses to the murder of Melanie, while also wishing that he killed Debra when he had the chance. Debra smirks as she leaves, feeling that she obtained evidence to convict him.

Soon, a DVD (recorded via a police dash cam) comes to light, showing that the arresting officers beat Speltzer before forcing him to accept the Miranda warning. Based on the video tape, Speltzer did not verbally acknowledge his rights (athough Detective Joey Quinn claims he nodded in acceptance). A judge throws out Speltzer's confession and lets him walk. Debra's pure frustration causes her to walk out.

Dexter deems that it's time to take down Speltzer. He breaks into Speltzer's RV (which had been impounded but was released following his confession being thrown out). He decides to turn it into a suitable (and portable) kill room, Looking around, Dexter finds injectable steroids, and Speltzer's trophies (earrings). Suddenly, Dexter is taken by surprise when Speltzer returns to his camper early. Before Dexter can react, Speltzer tackles him, initially overpowering him. Although Speltzer throws Dexter around the camper (even into the ceiling), Dexter uses his martial arts skills to throw Speltzer down twice. The fight ends when Speltzer knocks Dexter out with a nearby object.

Dexter awakens in an abandoned building that has been elaborately constructed into a maze. Dexter wonders if this maze is Spelter's masterpiece. Tied to a nearby grating is an envelope holding a note that simply says "Run." He walks carefully down the hallway, thinking that he never runs. When he turns a corner, he sees a calm Speltzer appear, wearing his bull-horned helmet and carrying an axe. Dexter realizes that pitted against a psychopath with an axe, his chances of survival are better if he runs, so he swiftly takes off through the maze...remaining a step ahead of his pursuer.

After displaying his athletic abilities by climbing down elevator cables, Dexter comes across an obscure room filled with mannequins and strobe lights to impair the senses. He moves slowly through the lifeless bodies, finding a nearby pole to use as a weapon when he spots what he believes to be Speltzer standing in the distance. He approaches slowly with weapon in hand, ready to strike. However, it is only a mannequin wearing the bull-horned helmet. Instinctively, Dexter dodges out of the way before being struck from behind with the axe. Dexter then knocks down Speltzer and pins him, saying that he could really use a shower. Speltzer smirks and tosses him off (seemingly enjoying the hunt). Before Dexter can locate him, Speltzer runs off, and Dexter moves deeper into the maze.

When Dexter ends up on a stairwell, he figures that Ray is trying to force him deeper and deeper into the maze. Rather than risk his life falling for this trap, Dexter decides to go up instead (breaking free some pallets used to block off the top of the stairwell). He makes it out onto the roof, with Speltzer following close behind and then jumps down to a roof below, escaping on a truck after he makes his way to the street.

At Melanie Garrett's funeral, Debra Morgan can be seen attending, along with Angel Batista. As she's about to leave, Debra notices Speltzer standing at a distance with a smug look on his face. She charges in his direction, and her rage takes the better of her as he taunts her. Debra later talks to her brother, becoming distraught over the failure in the justice system. Although this cold-blooded murderer was captured, he was released, only to appear at Melanie's funeral, smiling as her coffin was driven away. She admits to wanting to kill him, but thought about her brother being a serial killer. Debra questions if Dexter is trying to make the point that everyone wants someone dead. She sits there, and asks if it will ever get easier. After the two share some final words, she leaves the door open for Dexter to leave.

That night, Dexter walks through Briar Cemetery, deliberately exposing himself in order to lure Speltzer into a trap. At an open grave, Dexter leaves a note that says, "Stay." While reading it, Speltzer is distracted long enough for Dexter to sneak up behind and strike him in the back of the head with a shovel (the handle of which breaks into the form of a stake). This forces an unconscious Speltzer to fall into the pit. Dexter moves Speltzer into the crematorium, and ties him down to a platform (that leads directly into the crematory).

When Speltzer wakes up, he begins struggling violently to escape. He begins to yell, and Dexter yells back close to his face. Speltzer threatens to kill Dexter, and Dexter mocks him. When Dexter turns on the fires of the cremation chamber, Speltzer panics. Dexter tells him that he was supposed to be a way of helping his sister understand and accept him. Using the stake he has in hand, Dexter pierces Speltzer's heart.

Due to his concern about being discovered, combined with the problems with his sister, Dexter chooses not to take a blood slide. Then, feeling that he needs to move on, Dexter places his current blood slide box on top of Speltzer's body, and sends it into the flames, along with his latest victim. Both are burned to ash.

Outside, Dexter meets with his sister and points out the smoke arising from the crematory. He reveals that he just killed Speltzer, and Debra stares at the smoke. She asks Dexter if he did it for her, and he replies, "No." He asks Debra how she feels, and she admits that she is glad. Debra then asks Dexter what that makes her, and he simply says, "Human." 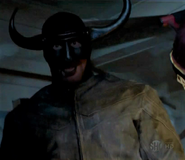 Dexter stalks Spelter at the gym

Speltzer with his hair grown out

Mannequinns in the Red Brick Warehouse