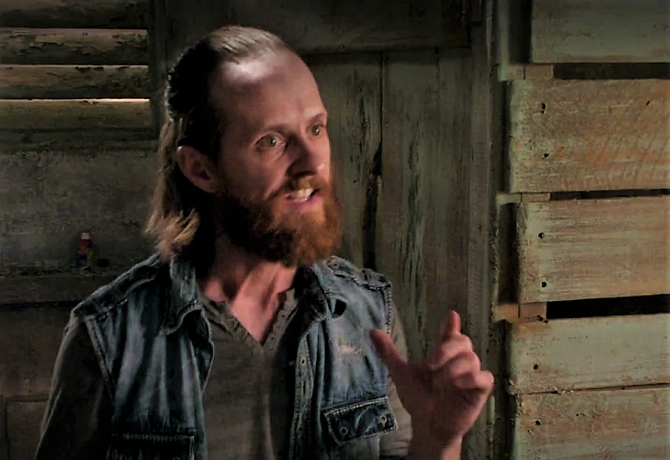 Bludgeoned repeatedly with a grappling hook

Rankin is a minor character in Season Five of the Showtime series DEXTER.

He is one of Dexter's few kills that doesn't fit the Code of Harry. He mouths off to Dexter at a rundown waterside store...and meets his end in the restroom.

Rankin is of medium height with a long, scraggly beard and thick auburn hair. He has a wide, sloping forehead and fashions his hair in the shape of a mullet. For clothes, he wears a long-sleeved, gray striped shirt with the sleeves rolled up, and a torn, blue jean vest. He also wears tight fitting jeans and boots. He appears to be in his mid-30s.

Rankin was surprisingly physically strong in his fight with Dexter -- even though Dexter is a martial artist who has proven himself capable of taking down foes larger than himself in hand-to-hand combat and shifting dead weight around after knocking people out,

Rankin was able to grab hold of Dexter when he lunged at him in a rage, stopping his forward momentum completely and shoving him backwards against a wall. However, Rankin could not defend himself after being stunned by Dexter's headbutt.

In his limited interaction with Dexter, Rankin is shown to be a boorish, surly, abrasive, obnoxious, rude man with little-to-no patience and a short fuse. Dexter first encounters Rankin as he angrily sifts through the store to find the key to the bathroom. When he spots Dexter, he takes offense to the way Dexter is staring at him and angrily calls him a retard.

After Dexter follows him into the bathroom, Rankin realizes he is about to retaliate, and angrily asks him what his problem is. When Dexter attack hims with an anchor, Rankin immediately fights back.

After Rita's death, Dexter prepares to leave everything behind, including Harrison, and disappear to start anew. After several miles on the water, he docks at a bait and tackle shop to refuel his boat. He enters the store to pay and finds a man (Rankin) angrily calling out for an attendant. When nobody appears, Rankin reaches behind the counter and searches until he finds the key to the bathroom. As he turns around, he spots Dexter. Taking offense at the way Dexter is staring at him, he calls him a retard and moves past him to the restroom. Dexter realizes that he should let it go, but instead follows Rankin.

Dexter enters the bathroom and grabs a grappling hook (being used as a theft-deterrent for the bathroom key). Rankin sees him do this and shouts at him as he understands that Dexter is about to retaliate. Refusing to be intimidated, Rankin angrily asks Dexter what his problem is, and Dexter tells him that his wife had died that week and it was his fault. However, Rankin, does not care about Dexter's grief and rudely says, "Well, I'm real sorry for your fucking loss, but your dead wife can suck my dick." Dexter angrily attacks Rankin, lunging at him with the hook

While Rankin defends himself at first, by grabbing Dexter's arm and shoving him against the wall, Dexter surprise attacks him with a headbutt. He shoves Rankin through the wooden cubicle and to the floor before bludgeoning him to death with the grappling hook. Dexter immediately breaks down and screams. As he backs away from Rankin's body, Dexter imagines a moment of internal dialogue with Harry, who tells Dexter that it was the first human thing he has done since Rita's death. Dexter doesn't express remorse for killing Rankin.

It is unknown if Dexter disposed of Rankin's body. He may have used his boat to drop it in the water somewhere.

Violation of The Code

Jimbo's, where scenes were filmed