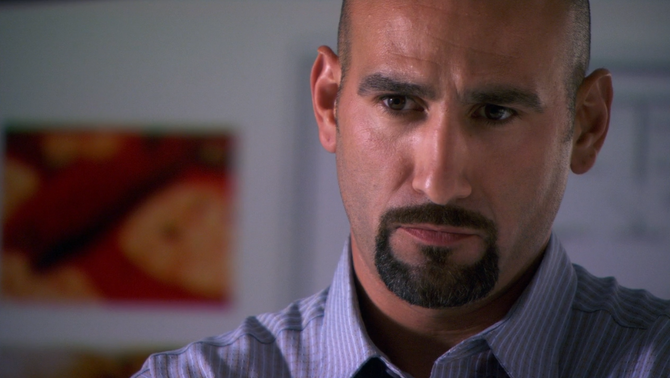 Lieutenant-Sheriff Ramon Prado is a character in Season Three of the Showtime series DEXTER.

He is the second eldest of the three Prado Brothers, following his senior, Miguel Prado, and preceding Oscar Prado. Ramon is a Lieutenant for the Miami Sheriff Department, who begins following the Skinner Case after his brother, Oscar, is killed. He tries linking previous victims together in belief that Freebo was responsible for Oscar's death.

He is known as the most hot tempered and volatile of the brothers, and a strict law enforcer. Ramon never takes kindly to Miguel's "new best friend," Dexter Morgan, having a distrust of someone coming so close to the family after his little brother's death. He begins to pursue and badger Dexter, especially after Miguel's death, and begins to drink heavily prior to his arrest (after pulling a gun on Dexter). Dexter is finally able to convince Ramon of his anger problems and the danger of repeating mistakes with his own children. Ramon then lets go of his rage for Dexter and never bothers him again.

He is the only Prado brother still alive after their run-in with Dexter Morgan and the only one to bear any children. He acts as a Secondary Antagonist, while his brother Miguel, was the Main Antagonist for Season Three.

Ramon is a Cuban man in his mid-thirties to mid-forties of average height with brown eyes, a black beard, and shaved head, giving him a rather intimidating appearance. He is the middle Prado brother, being younger than Miguel, but older than Oscar. He rarely smiles and is often seen with a stern expression on his face. He mostly wears Cuban-styled collared shirts with gray or khaki pants.

Ramon is a very serious, brooding individual. He is also hot tempered and prone to fits of rage, in addition to being a borderline alcoholic, which contributes to his violence. He is also known to make rash decisions in his anger, such as pulling a gun on Dexter in front of both of their families. Another example of his aggression is shown when he kidnaps a drug dealer associate of Freebo. He tortures him by spraying soda bottles in his face in an attempt to attain information as to Freebo's location.

He also works along with his older brother, whom Ramon respects, to help build up his legend as an enforcer for justice. He was actually the one who assaulted their abusive father, kicking the man down a flight of stairs, but allowed Miguel to take credit for the He continued to act as the backbone of Miguel's legend.

Ramon is the son of an abusive Vietnam veteran and the middle Prado brother, being the younger brother of Miguel and the older brother of Oscar. Although Miguel claimed to be the one who kicked their father down a flight of stairs, it was indeed Ramon who did so and allowed Miguel to take credit in order to support Miguel's reputation as a just enforcer of the law. As an adult, he became a lieutenant for the Miami Metro Sheriff's Department known for being a strict enforcer of the law and being hard on criminals.

Ramon and Miguel were both devastated at Oscar's death, with Ramon steadily becoming more and more unstable with time, frustrated with the Miami Metro Police Department's handling of the murder case. Initially, Ramon attempts to keep working, though he steadily slides into alcoholism. In an effort to help his brother, Miguel tried to convince Dexter to tell Ramon about Freebo's death, but is convinced otherwise when Ramon, with a little provoking from Dexter, attacks an innocent person in front of his brother. His increasing recklessness eventually drove him to the point of kidnapping and torturing one of Freebo's clients, which in turn got him arrested by Debra and Quinn. Instead of prison, Ramon, largely disgraced in the eyes of his Miami Metro PD colleagues, unwillingly accepted the offer from the police union of early retirement with benefits, and so surrendered his gun and badge.

After Miguel was seemingly killed by The Skinner (really Dexter to stop his murderous rampage), Ramon, desperate for someone to blame, went out of control. Having been taken on earlier as a bodyguard for Miguel against Dexter (who he had always had a slight distrust of), and so was driven to hunt Dexter. Dexter tried to find Ramon without success, but instead Ramon showed up in a drunken rage at Dexter and Rita's rehearsal dinner, and pushes off Dexter's calm attempts at discussion. He instead draws his pistol and jammed it in Dexter's face, but was stopped and arrested by Batista and Debra.

Even though Dexter's dark passenger recommended Dexter kill Ramon out of mercy, Dexter, instead, elected to speak to him while he languished in the county jail. Dexter's words made Ramon understand and face his own demons, as well as bringing peace between them. The end result was Ramon finally coming out with the source of all his pent-up anger, frustration and distrust: Miguel. All of his life, Ramon remained in his famous brother's shadow (and even helped to build it - such as knocking their abusive father down the stairs and letting Miguel take the credit), that, while Miguel had the appearance, charm and even the intelligence, Ramon had the strength and spent his whole life holding Miguel's legend together. Now that Miguel was dead, Ramon let go of his harsh behaviors so as to not pass it on to his beloved son and daughter. Realizing Ramon was never the real threat to him, Dexter mused to himself "You don't always have to shoot a wounded animal; sometimes you can remove the thorn."  With Ramon at peace, Dexter saw no reason to prosecute or kill him, and they parted ways peacefully. As one last favor from his famous brother, Ramon Prado was released in a matter of days.